Samsung has launched a new variant of its Galaxy A20 smartphone in the Indian market. The new handset comes with an Infinity-V display and dual rear cameras. Additional highlights include a rear-mounted fingerprint sensor and an octa-core Exynos 7884 SoC. Read more to find about Samsung Galaxy A20e Price in India, Specifications, and Features 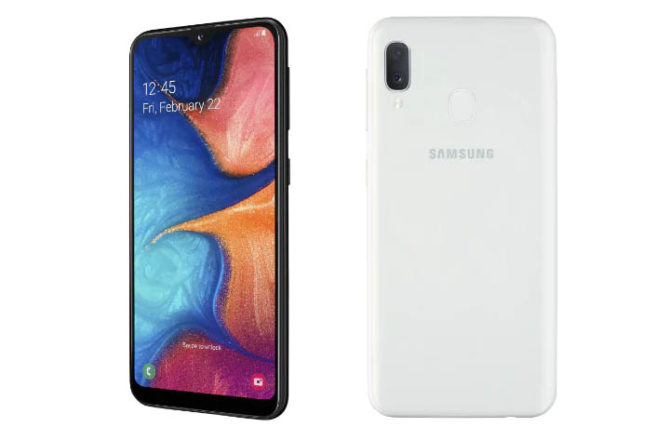 As of now, there is no information about the Indian price or launch date of Samsung Galaxy A20e. However, it will come in Black and White color options. The Samsung Galaxy A20 was recently launched at Rs 12,490.

The Samsung Galaxy A20e is powered by an Exynos 7884 processor and 3GB RAM. The 32GB internal storage can be further expanded via a microSD card. The 3,000mAh battery comes with 15W fast charging support.

In terms of optics, the new smartphone sports a dual camera setup on the back. It comes with a 16-megapixel primary sensor (f/1.9 aperture) and a 5-megapixel secondary sensor (f/2.2 aperture). For selfies and video calling, the new handset sports an 8-megapixel front camera (f/2.0 aperture).

The Android handset features a 5.8-inch TFT Infinity-V Display panel with HD+ (720 x 1560 pixels) resolution. It sports a one-piece plastic build. A fingerprint sensor is placed at the back.

The Samsung Galaxy A20 is powered by an octa-core (1.6GHz + 1.35GHz) Exynos 7884 processor and 3GB RAM. The 32GB internal storage can be further expanded via a microSD card (up to 512GB). It runs Android 9.0 Pie operating system with the company’s One UI skin on top.

In terms of optics, the mid-range smartphone sports a dual camera setup on the back. It combines a 13-megapixel primary sensor (f/1.9 aperture) with a 5-megapixel secondary sensor (f/2.2 aperture). For selfies and video calling, the handset sports an 8-megapixel front camera with an f/2.0 aperture. It is backed by a large 4,000mAh battery.

The new handset sports a 6.4-inch Super AMOLED Infinity-V display with HD+ (720 x 1560 pixels) and a waterdrop notch. It features a 3D Glass build and a rear-mounted fingerprint sensor.

What do you think of the price and specs of the Samsung Galaxy A20e? Share your views with us in the comments section below.