Alcatel has launched its latest Pixi series smartphone, called the Alcatel Pixi 4 Plus Power. The main highlight of the phone is its massive 5000mAh battery. It also doubles up as a power bank to charge other smartphones. 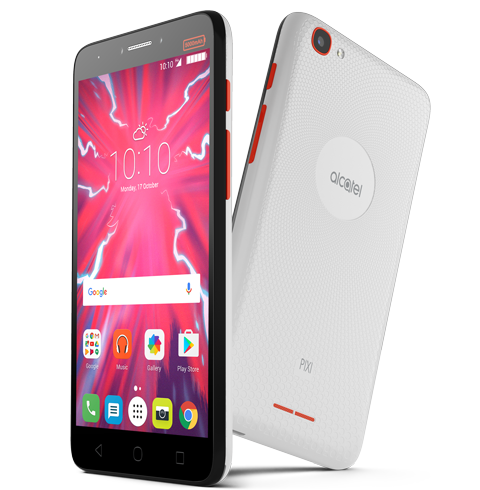 As for specifications, the Pixi 4 Plus Power features a 5.5-inch HD IPS (1280×720 pixels resolution) display and runs Android 6.0 Marshmallow operating system. The phone houses 1GB of RAM and 8GB of internal memory. It also supports expandable storage up to 32GB via microSD card. On the camera front, it sports a 13 mega pixel primary camera with LED flash. There is also a 5 mega pixel front shooter onboard for capturing images and making video calls. The camera app offers 16 creative filters and 13 beautiful borders for enhanced images.

The 5000mAh battery of Pixi 4 Plus Power supports Quick Charging. The battery of the phone is rated to last up to 2.7 days without a charge, 22 hours on Wi-Fi browsing, 14 hours on video streaming and 5 days on non stop music. It measures 152×78.3×9.9 mm and weighs 202 grams. Connectivity options which the dual SIM phone offers, include 3G, Wi-Fi, Bluetooth and GPS. It will be available in Black and White color options with interchangeable rear panels in Blue, Green, Orange, White, and Black color options.

There is information about pricing and availability of the Alcatel Pixi 4 Plus Power as of now. We expect more details to be announced in the coming days.