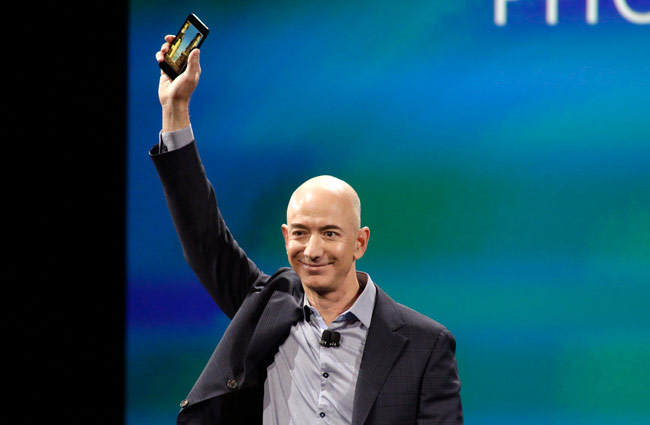 During an announcement event, Bezos gave an insight about the Smartphone and how people can fiddle with it. The Fire Phone will bring features found in other Amazon devices, such as X-Ray for supplemental content and Mayday for live tech support.

The new Amazon device will have a 13 megapixel camera f/2.0 lens and a 3D-like experience called “dynamic perspective.” It is powered by 2.2 GHz quad-core processor and 2 GB of RAM.

It has a Gorilla Glass on both sides and CNC aluminum buttons. It also features a rubberized frame.

The all new Amazon Smart device provides feature which a user can use over their Amazon sit as well. Like the cameras can be used to recognize items, from books to DVDs, on a feature known as Firefly with which users can get instant product information before making a purchase.

Firefly identifies printed phone numbers and email addresses, and one can also save them as a contact. Additionally, it can recognize movies and TV episodes, and can show actor information and plot synopses.

The phone also support tilt-to-scroll feature, in which a users can scroll through items without touching the screen. Tilting can also be used for enhanced search results.

Through Fire Phone users can have unlimited photo storage on Amazon’s cloud drive. The phone will also be integrated with Amazon Music and Mayday, Amazon’s customer service tool.

Amazon is selling the Fire Smartphone on its website for $649 without a contract from July 25. Where as a 32-gigabyte storage version will sell for $199.99 with a two-year contract on exclusive carrier AT&T Inc.

The first ever Smartphone from Amazon is giving features at a non comparable price. Moreover, it is going to shake the Smartphone Industry soon. The Fire Smartphone, is a step ahead of Apple and Samsung devices in terms of features.