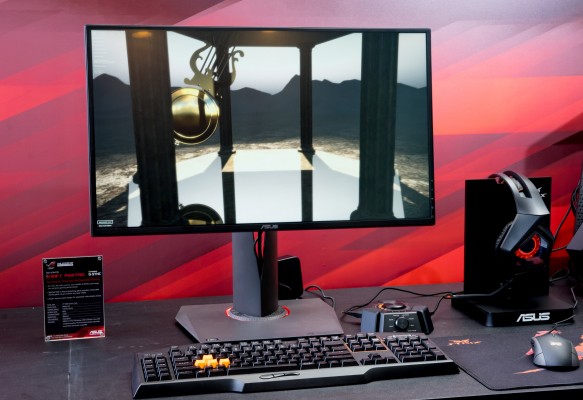 The ROG Gaming products are phenomenal and are amazing, but at the CES, the Swift PG27AQ stole the show. It has an unbelievable  3840*2160-pixel 4K/UHD resolution. It has a magnificient 1000:1 contrast ratio and 300cd/m2 brightness for graphics to stun you.The monitor is also equipped with the NVidia G-SYNC technology, which synchronizes its refresh rates to the computer’s graphics-processing unit (GPU), eliminating screen tearing and minimizing stutter and input lag to deliver the smoothest gaming experience possible. The monitor also comes with an on-screen display,with a 5-way joystick and hotkey shortcuts, an ergonomic design, with complete tilt, pivot, height adjustment and swivel.
ROG G20 compact gaming desktop PC 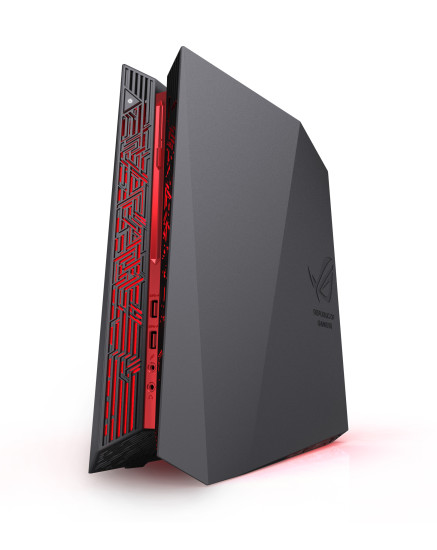 The next product on the list is the ROG G20 Compact Gaming Desktop. The G20 brings all the cool hardware in one small CPU, while keeping its attractive feel. It comes with a 12.5-liter case, and the CPU is powered by a  4th-Gen Intel Core i7. The GPU in the ROG G20 is an NVidia GeForce GTX 980, giving the user the perfect system for gaming as well as entertainment. Suprisingly, the CPU hardly makes any noise; 22dB when it’s idle, and the ROG G20 has a very bold design. Put in its aggressive markings and black finish and you have a fine CPU. And the ROG G20 has already bagged 4 awards, including the 2015 CES Innovation Award and the Good Design Award 2014.
ROG GR8 console-size gaming PC 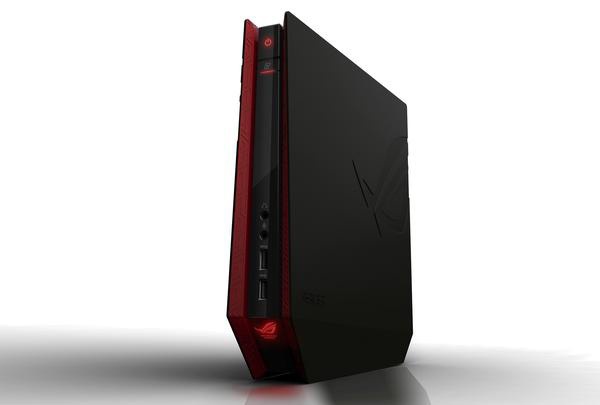 Next in line is the ROG GR8 Console-size Gaming PC. With an Intel i7 and an NVidia GeForce GTX 750Ti, the graphics on this computer are just outstanding. It is shipped with 16GB DDR3L memory, alongside a 802.11ac WiFi, and comes with a hard drive. This PC has Windows 8.1 pre-installed. It comes with a Miracast reciever, allowing you to stream HD entertainment wirelessly. And like the ROG G20, it has a matte-black finish too. The ROG GR8 has won the CES Innovation Award too.
ROG Enthusiast SLI Bridge 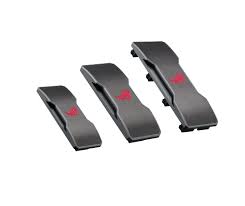 Moving onto the next product, we have the ROG Enthusiast SLI Bridge. This bridge makes sturdy Scalable Link Interface connections without any hassle, and has a very stylish look. SLI Bridge comes with an illuminated ROG Logo, and an aluminium luster. The bridge is available for any type of configuration upto four-way.
ROG Spatha gaming mouse and the ROG Sica gaming mouse 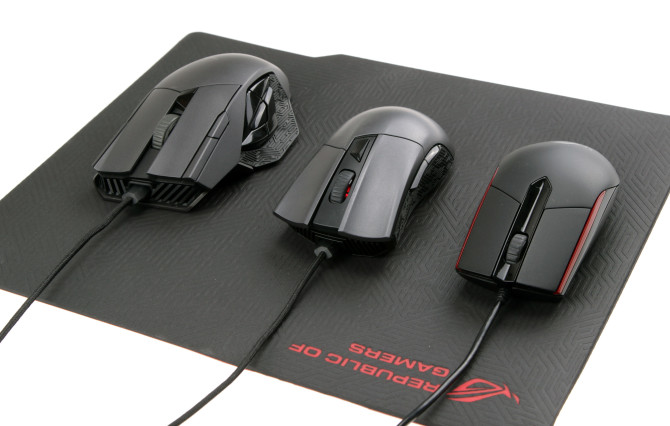 ROG released two mice; the ROG Spatha and the ROG Sica. Spatha is ROG’s main mouse, stealing the limelight here. It has six customizable macro buttons within thumb reach, making the most advanced moves easy to perform. The mouse comes with the ROG Armory, allowing users to modify almost every corner of the mouse. the ROG Sica, is a wired mouse, with pin-point precision and unbelievable control in-game. It also has a socketed-switch design, giving players the ability to modify it just like they want. The ROG Sica is finished off with Mayan-patterned design.
ROG Whetstone gaming mouse pad 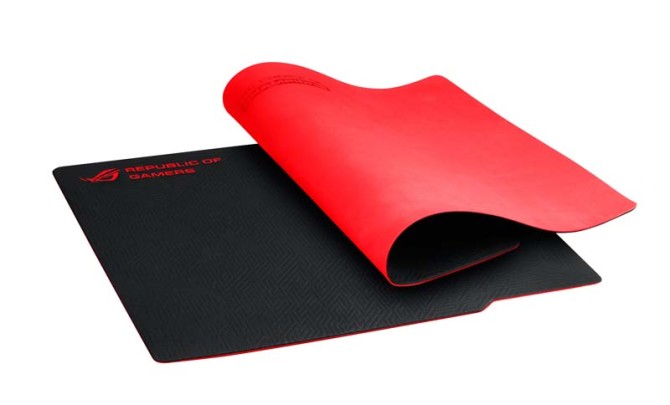 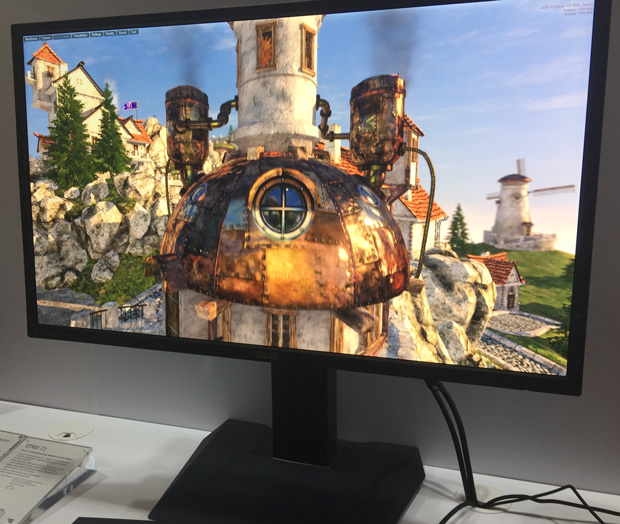 The next monitor in ASUS’ lineup is the MG279Q, a 27-inch display armed with in-plane switching technology and an exceptional WQHD 2560*1440 pixel resolution. It also comes with a five-way display, and offers gamers a magnificient gaming experience with its 5ms Grey-To-Grey response time. The MG279Q is equipped with an ergonomic design, giving it complete tilt, pivot, height adjustment and swivel. Connections include DisplayPort, two HDMI ports and a MHL 2.0 socket for 1080p. MG279Q also has a built-in dual USB 3.0 hub for device changing and data transfers that are up to ten times faster than USB 2.0.
Strix 7.1 true 7.1 surround gaming headset 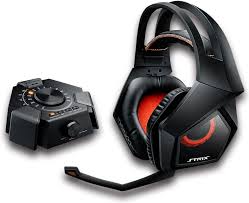 The Strix 7.1 is a superb 7.1 surround gaming headset. It has 10 drivers to precisely position the audio, and marvellous light effects to let the gamers experience their style. The headset is covered with a protein-leather-covered foam, making it comfortable for long gaming sessions. It comes with a plug-and-play USB Audio station, 90% noise cancellation and four audio spectrum profiles, giving the gamer the ability to completely change the way they want the audio to be.
Strix Claw Gaming Mouse 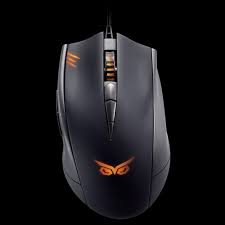 The Strix Tactic Pro is a durable, illuminated keyboard, engineered for lightning fast reactions and has 13 dedicated, easy-to-reach macro keys, for easy commands. Gamers can also assign macros to keys F1-F8, and can also use the on-the-fly macro recorder to create macros without interrupting your game.
Strix Glide Control and Strix Glide Speed gaming mouse pads