Gionee has today, launched its Marathon M5 smartphone in India. The USP of this device is its massive 6020mAh battery. The handset also supports fast charging and reverse charging. Priced at Rs. 17,999, the Marathon M5 is available to buy exclusively from Flipkart.

Boasting of its monstrous battery and decent specs, it will compete with the Lenovo Vibe P1 smartphone which is backed up by a 5000mAh battery. Read on to find out how Gionee Marathon M5 vs Lenovo Vibe P1 compare with each other in terms of specifications and features. 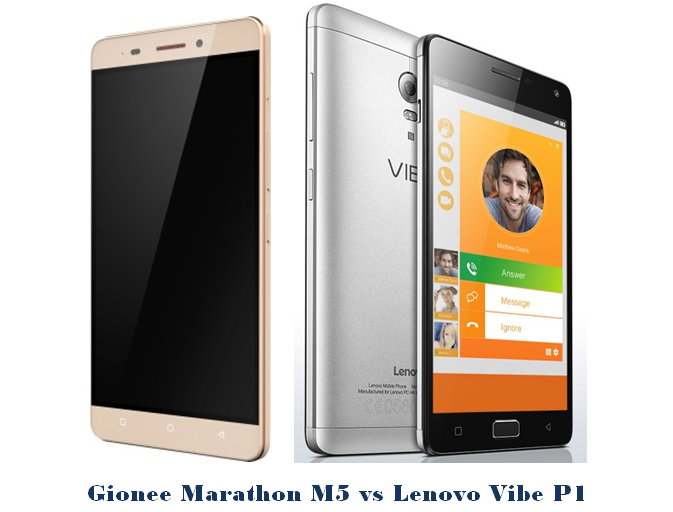 The Gionee Marathon is powered by a quad-core MediaTek MT6735 chipset paired with 3GB of RAM. The Lenovo Vibe P1 on the other hand, comes with an octa-core Qualcomm Snapdragon 615 processor coupled with 2GB of RAM.

While the display size of both smartphones is same- 5.5-inch, there is a difference in display resolution. The Marathon M5 features a 5.5-inch HD display with resolution of 1280×720 pixels whereas the Vibe P1 comes with 5.5-inch full HD display with 1920×1080 pixels resolution.

Both devices house 32GB of internal memory which can be expanded further up to 128GB using microSD card.

The Lenovo Vibe P1 features a fingerprint sensor for additional security. The Marathon M5 misses out on fingerprint scanner.

Both smartphones are closely matched to each other in terms of specifications and features. Talking of battery department, the Marathon M5 does have an upper hand. But in terms of price, camera and fingerprint sensor, the Lenovo Vibe P1 has an edge over the Marathon M5.

Which smartphone between Gionee Marathon M5 vs Lenovo Vibe P1 do you think is better? Share your views with us in the comments section below!