Google has finally started rolling out YouTube dark mode for Android users. The new feature turns the interface all black to reduce strain on the eyes, especially at night. It is already available on iOS devices and desktops. Let us help you enable the new feature on your smartphones. Here’s How To Use Dark Mode On YouTube for Android 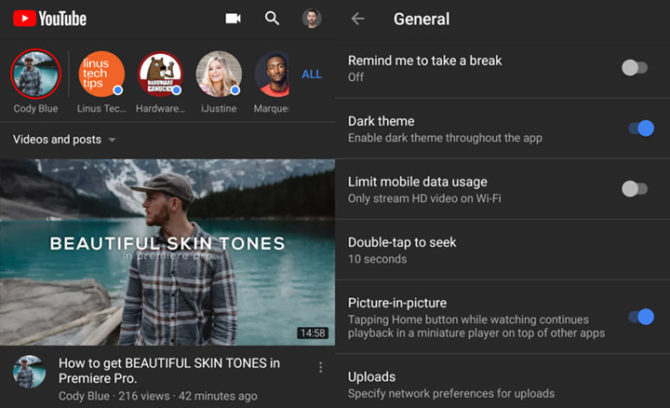 Apart from reducing eye strain, the dark mode also offers a more immersive experience. It also helps in saving battery life. The feature was first introduced to a desktop version of YouTube desktop last year. An iOS update followed in March this year. Now, YouTube has stated that it is rolling out the dark mode for its Android app.

Here’s How To Use Dark Mode On YouTube for Android

Also read: How To Get Sleep Standby Optimisation On OnePlus 5, OnePlus 5T

Apart from the new dark mode feature, YouTube has introduced several changes over the last few months. It now allows creators to add hashtags in video titles and description. Additionally, Google is working on a new Explore tab that will replace the Trending section on the platform.

Currently, the video streaming platform has 1.9 billion users monthly active users. Google claims that users watch over 180 million hours worth videos on TV screens every month. The platform is also bringing original programming to the several markets including India.

What do you think of the new Youtube feature? Are looking forward to trying it on your Android smartphone? Let us know in the comments section below.