Lenovo was expected to launch the Z5s smartphone on December 6. However, the company instead released a new teaser and launch date. The upcoming smartphone is teased to come with Snapdragon 678 SoC, an in-display front camera (display hole) and triple rear cameras. Additionally, a Lenovo Z5s Ferrari SuperFast Variant might be the first handset to sport 12GB RAM. Read more to find about Lenovo Z5s Price in India, Specifications, and Features 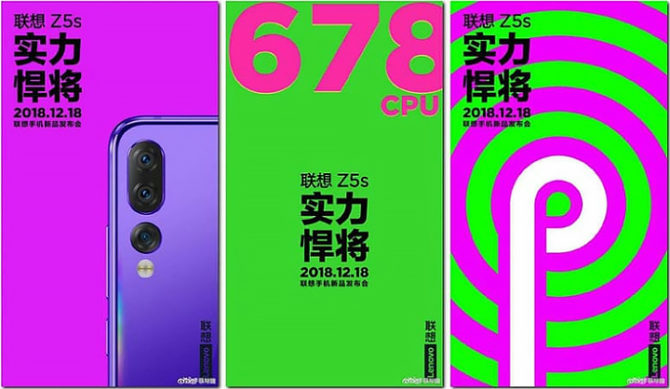 The Lenovo Z5s will be officially unveiled in China on December 18th. It has already been certified by TENAA (Chinese certification authority). As of now, there is no confirmation about the Indian price or launch date.

Recently, Honor V20 and Samsung Galaxy A8s were announced with an in-display selfie cam. We might one more device with display holes before Lenovo Z5s. The Huawei Nova 4 is expected to be announced on December 17th.

The upcoming handset is expected to be powered by a Qualcomm Snapdragon 678 processor (yet to be launched) or Snapdragon 710 SoC. It is said to run Android 9.0 Pie operating system out-of-the-box with the company’s own ZUI customizations on top.

Additional features include a fingerprint sensor and triple camera setup on the back. It is backed by a 3210mAh battery. In terms of dimensions, the upcoming handset measures 156.7 x 74.5 x 7.8mm. It is likely to come in multiple color options (including Blue).

The special edition model (model number L78071) has been spotted online with Snapdragon 845 processor along with 12GB RAM and 128GB internal storage. It is likely to run Android 9.0 Pie OS with ZUI 10 on top.

The dual-SIM smartphone features a 6.39-inch Super AMOLED display with full-HD+ (1080×2340 pixels) resolution, a 19.5:9 aspect ratio and Corning Gorilla Glass protection. It comes with an in-display fingerprint sensor. The Android (8.1 Oreo) handset is powered by an octa-core Qualcomm Snapdragon 710 processor along with Adreno 616 GPU and 6GB RAM. It is backed by a 3,350mAh battery.