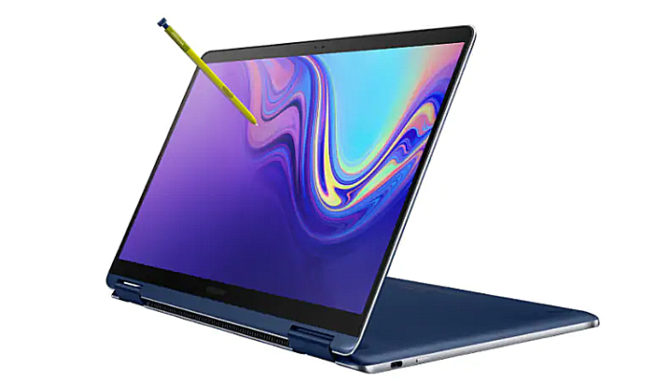 The new Samsung Notebook 9 Pen (2019) is now available in South Korea. It is expected to arrive in other regions (Brazil, China, Hong Kong, and the US) early next year. As now, there is no information about the Indian launch date and price.

The new 2-in-1 notebook is powered by Intel’s 8th-generation Core i7 processor along with Intel UHD graphics/ Nvidia GeForce MX150 (2GB), 16GB LPDDR3 RAM, and 512GB PCIe NVMe SSD storage. It is backed by a 54Wh battery with fast charging support.

Additional features on the device include facial recognition, fingerprint recognition, a backlit keyboard, and built-in S Pen (improved). You can also download the Myscript Nebo app for a free three-month trial.

The Samsung Notebook 9 Pen (2018) sports a 13-inch (930QAA) RealViewTouch display with full HD resolution (1920 x 1080 pixels). The Intel processor on the laptop is supported by up to 16GB DDR4 RAM, Intel HD graphics, and up to 512GB NVMe PCIe SSD storage. The bundled S-Pen is battery-free. It can recognize 4,096 levels of pressure. The fine 0.7mm tip and convenient tilt detection offer more natural writing and drawing experience.

The all-metal laptop sports a magnesium aluminum chassis and weighs only 995 grams. It is backed by a 39Wh battery with a 45W DC-in adapter. Additional features include a fingerprint sensor, backlit keyboard, precision touchpad, and a 720p Windows Hello front camera.