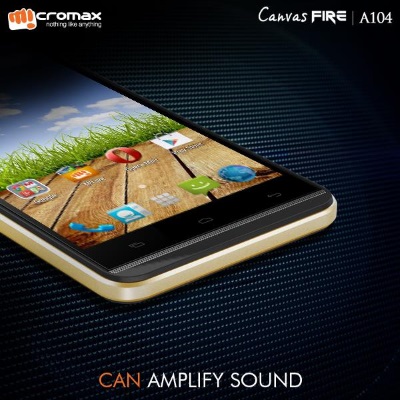 The Canvas Fire A104 is a dual-SIM device (regular SIM + Micro-SIM). It features a 4.5-inch (unspecified resolution) display. It is powered by a 1.3GHz quad-core MediaTek (MT6582M) processor alongside 1GB of RAM.It sports a 5-megapixel autofocus rear camera with LED flash, while it also houses a 0.3-megapixel front-facing camera. The smartphone includes 4GB of inbuilt storage which is further expandable via microSD card (up to 32GB).

The Micromax Canvas Fire (A104) packs a 1900mAh battery which is rated to deliver up to 6 hours of talk time and up to 180 hours of standby time. The smartphone comes with GPRS/ EDGE, 3G, Wi-Fi, Bluetooth, GPS and Micro-USB connectivity options.

Micomax Canvas Fire A104 is available through ecommerce portals and available in three variants Black and Gold; White and Gold, and White and Silver.