Yesterday, we reported that Micromax listed two new tablet Micromax Canvas Tab P650E and Micromax Funbook Ultra HD P580 on its official website. Today Micromax listed another tablet Micromax Funbook P365 on its website with the price tag of INR 6,749. The tablet is voice calling tablet along with no 3G support, but it do have Wi-Fi and Bluetooth built in. The same tablet was earlier spotted on Snapdeal too with price tag of INR 6,999. Now Micromax made it official. The same tablet is also available on MTS stores too as MTS is offering Data card along with this tablet worth INR 8,89. The Micromax  also offering same MTS offer with this tablet that it offered with Micromax Canvas Tab P650E yesterday. 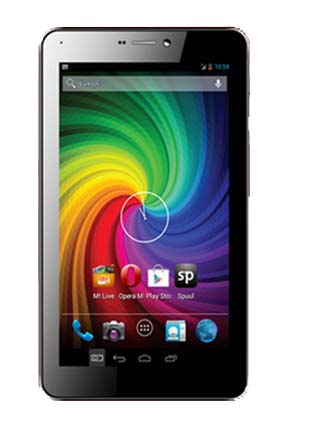 The Micromax Funbook P365 has 7-inch TFT display along with 800*480 pixel resolution. There is 1.2GHz dual core Rockchip processor along with Mali 400 GPU. There is 1GB RAM on board as well. The tablet has Android 4.2 jelly Bean operating system.

At back, there is 2-megapixel camera for capturing images and videos. There is VGA front facing camera too at front. There is 4GB internal storage in tablet. The memory of tablet is expandable up to 32GB via a memory card support.

On the connectivity front, there is Wi-Fi, Bluetooth, Micro-USB support but lack of 3G support. So it will disappoint some buyers. The tablet comes with 2800mAh battery that can give talk time up to 6 hours only and standby time up to 70 hours.