Realme (previously OPPO’s sub-brand) has finally launched a successor to its Realme 1 smartphone.  The Realme 2 is a big device for the independent brand. Highlights of the device include face unlock feature, 4,230mAh battery, and up to 4GB of RAM. Read more to find about Realme 2 Price in India, Specifications, and Features 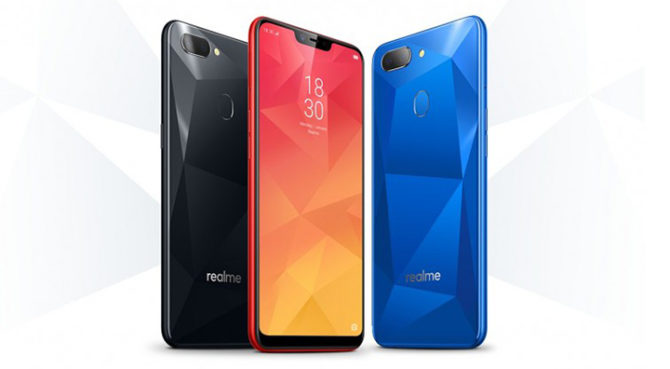 The Realme 2 is priced in India at Rs 8,990 for the 3GB RAM/ 32GB internal storage variant. The 4GB RAM/ 64GB storage model costs Rs 10,990. It will be available via Flipkart on September 4 in Diamond Black and Diamond Red color options. A Diamond Blue variant will go on sale in October.

As part of launch offers, the Realme 2 comes with Rs 750 discount on purchases made via HDFC Bank credit and debit cards. Customers can also avail up to 120GB additional data and up to Rs 4,200 benefits from Reliance Jio.

The Realme 2 sports a 6.2-inch in-cell display with HD+ (720 x 1520 pixels) resolution, 19:9 aspect ratio, 88.8 percent screen-to-body ratio, and maximum brightness of 360 nits. It is powered by an octa-core Qualcomm Snapdragon 450 processor along with an Adreno 506 GPU. The internal storage can be further expanded via microSD card (up to 256GB).

The new handset is backed by a 4,230mAh battery.

The Realme 2 measures 156.2 x 75.6 x 8.2mm and weighs 168 grams. Sensors on the device include an accelerometer, ambient light sensor, and proximity sensor. Security options include face unlock feature and a fingerprint sensor (rear-mounted).

Recently, Realme separated from its parent company Oppo. It is now headed by Sky Li (credited with Oppo’s growth from just 3 markets to 31 countries/regions). He claims that the Realme brand is targeted at young people around the globe. Since the Realme 1 features OPPO’s branding, the Realme 2 will be a real test for the brand. We will have to wait and see how it performs in the extremely competitive smartphone market.

The company is also expected to launch Realme 2 Pro next month. What do you think of the upcoming Realme 2? Will you be purchasing the new smartphone? Let us know in the comments section below.