Its been a while since the launch of Asus Zenfone 5 and Sony Xperia E3 in Indian market. Both the smartphones launched earlier this year in 2014, have been able to draw huge crowd of buyers towards themselves due to their impressive and highly competitive price for the features. Now Samsung has launched its budget smartphone, Samsung Galaxy Core Prime at Rs. 9,700 which will compete with these smartphones. In this post we bring to you, the comparison of these three mid-ranged smartphone- Samsung Galaxy Core Prime, Asus Zenfone 5 and Sony Xperia E3. Scroll down to see more information, so that you may be able decide which smartphone among these should you buy and which one should you not. 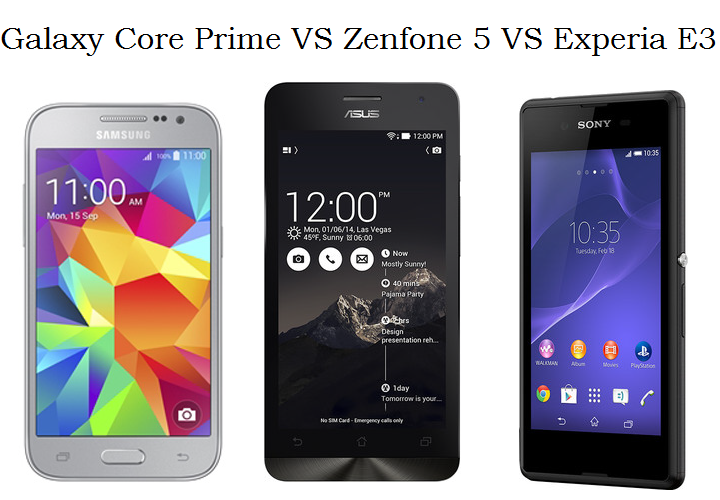 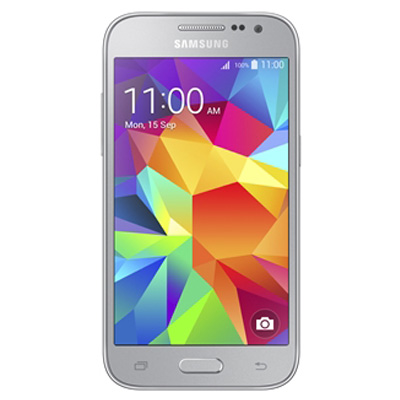 Samsung Galaxy Core Prime and Sony Xperia E3 both the smartphones come with a 4.5 inch capacitive touchscreen display, while Asus Zenfone gets a 5 inch display with Gorilla Glass 3 protection for keeping the device scratch free and gives an amazing viewing experience with its larger screen and better resolution of 720 x 1280 pixels as compared to the 480 x 800 pixel and 480 x 854 pixel resolution of the former ones. Galaxy Core Prime features PLS (Plane to Line Switching) which enables the users view the screen with more brightness.

While Asus Zenfone 5 comes with Dual-core processor clocking at 1.6 GHz along side 2 GB of RAM making it easier for the users to access the apps with more speed in a hassle free way. Although it runs on Android 4.3 Jelly Bean operating system, yet it can be easily upgraded to 4.4.2 KitKat operating system.

5 mega pixel primary camera is housed in both Galaxy Core Prime and Xperia E3 but they differ in the front camera with Xperia featuring a VGA front camera which is quite outdated now due to the availability of many other smartphones with better front facing cameras. Features like Geo-tagging, touch focus and face detection come as standard on both Samsung Core Prime and Xperia E3.

All the three devices come with sufficient storage to store all data, images, videos, audios and so on. Galaxy Core Prime and Zenfone 5 entail 8 GB of internal storage, expandable up to 64 GB via microSD card, while Sony E3 equips a 4 GB internal memory which is further expandable up to 32 GB.

The battery pack of all three devices is pretty decent which allows to use the smartphone for whole day without any inconvenience.

Galaxy Core Prime packs a 2000 mAh battery, Zenfone 5 packs a 2110 mAh battery and claims up to 353 hours of stand by time and nearly 18 hours and 30 minutes of talktime.

Price becomes the most important factor while buying any smartphone but in this case it does not matter much as these phone carry almost similar price tags. Samsung Galaxy Core Prime comes with the cheapest price tag among all these devices at Rs. 9,700. Asus Zenfone 5 is priced slightly higher at Rs. 9,999 which can be ignored due to the host of premium features that it offers. While Xperia E3 is most expensive among these which is priced at Rs. 11,790.

All three aforementioned smartphones are budget devices for the buyers who do not want to spend much and on the same time they want their smartphone to be equipped with the impressive latest features. They have a price difference of approximately Rs. 1000 among each other, yet Asus Zenfone priced at Rs. 9,999 lying nearly in between the three smartphones in terms of price is highly competent and comes with the balance of good camera, better processor, a bigger 5 inch screen which makes it more of a phablet than a phone. It also entails more of RAM (2 GB) and gives best value for money with heaps of attractive features. The only thing where it lacks behind is its operating system which is 4.3 Jelly Beam which comes with a solution though of being upgraded.

Let us know which smartphone do you like the most, in the comments below.