Micromax has recently launched its first smartphone under Yu brand- –Yu Yureka with Cyanogen 11 based Android 4.4.4 Kitkat operating system which delivers optimized security, privacy and performance. Yureka is the cheapest LTE enabled smartphone available in the country priced at Rs. 8,999. It will go on sale starting from January 2015 while registration for this smartphone are now open exclusively through e-commerce marketplace Amazon. Despite its brilliant features and lower price, it will rival other handsets in the Indian market. In this post (Yu Yureka Vs Xiaomi Redmi Note), you will find detailed comparison of Yu Yureka with its rivals namely Xiaomi Redmi Note 4G and Xiaomi Redmi Note. Scroll down to find how does Yu Yureka compares with Xiaomi Redmi Note in specifications, features and price. 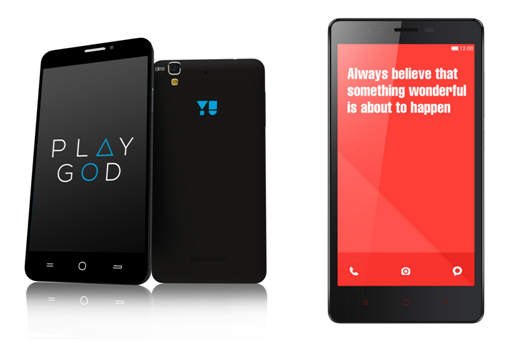 Both Yu Yureka and Redmi 4G are backed up by Qualcomm Snaprdragon Soc’s. The former is powered by Octa-Core Qualcomm Snapdragon 615 Cortex A-53  clocking at 1.5 GHz with Adreno 405 GPU while the latter is powered by Quad-Core Qualcomm Snapdragon 400 clocking at 1.6 GHz with Adreno 305 GPU. Xiaomi Redmi Note on the other hand comes with Octa-Core 1.7 GHz MediaTek MT6592 processor with ARM Mali-450 graphics engine. All these smartphones are coupled to 2 GB RAM.

All these smartphones come with 5.5 inch display. Yureka features an HD IPS display featuring Corning Gorilla Glass 3 protection to protect the device from scratches and damages. While the Redmi Note 4G and Redmi Note employ an IPS display with 1280 x 720 pixels resolution and 267 ppi pixel density and are also based on Corning Gorilla Glass 3 protection.

Talking about the imaging front, all the devices have a tie among them with all sporting a 13 mega pixel rear camera with LED flash and f/2.2 aperture and a 5 mega pixel front facing camera for capturing stunning selfies and making video calls. Yureka comes equipped with additional Sony Xmor sensor.

These devices are equipped with more or less similar features and thus pricing becomes a major factor in deciding which smartphone has an upper hand in the competition.  Redmi Note 4 is available with price tag of Rs. 8,999 but it lacks 4G connectivity. While Redmi Note 4 which acts as a direct competitor to Yu Yureka comes with all the features, but it costs Rs. 1,000 extra for the similar features but lacks dual SIM and has lower performance CPU compared to the Yureka which is priced at Rs. 8,999. Though all these devices are competitively priced, yet recently launched Cyaonogen based Micromax Yu Yureka offers its impressive and advanced features like security, customization and optimized performance at a slightly lower price proving itself a value for money device.