Apple is all set to roll-out the next version of iOS. The iOS 12.1 will bring multiple upgrades to the iPhone devices. This includes the dual-SIM functionality on all 2018 models. This will be done via support for the miniature eSIM slot. Read more to find about the Apple iOS 12.1 Upgrades for Apple iPhone XS, XS Max, XR 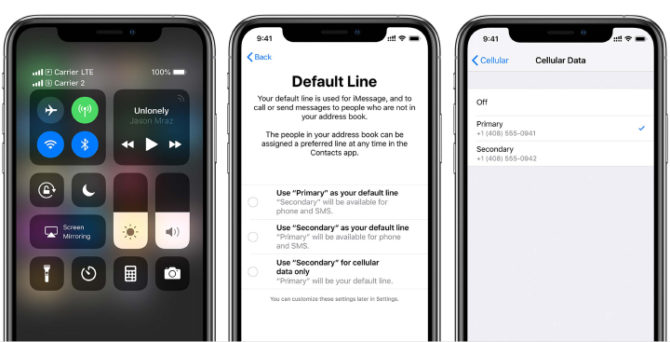 During the launch of the 2018 iPhone models, Apple announced that an update with eSIM support will be rolled out during the Fall this year. Accodring the newly updated iPhone User Guide, the next version goes iOS will be announced tomorrow.

Both SIMs will be active at the same time for call and data services. However, cellular data can only be active on of the SIMs. Also, when one of the SIMs is on-call, a call on the other will lead to voicemail.

Additionally, the Apple iOS 12.1 will bring Group FaceTime feature (allows users to set up a video conference with a total of 32 contacts), four new Animoji, and the all-new customizable Memoji feature.

The new update also brings a Real-time Depth Control (artificial blur to the background of subjects). The Apple iPhone XS, XR, and XS Max allow you to edit the amount of blur applied after you take a picture in Portrait mode via the Photos app. Now, users will be able to adjust the amount of blur before taking the photo. A new ‘f’ button appears in the top controls and then a dial appears that lets you customize blur in the Portrait mode shot.

While iPhone (2018) users will now be able to use more than one carrier off their device, the eSIM won’t be available through all operators. The current list includes only 14 operators. In India, only Airtel and Reliance Jio support eSIMs.

Apple announced new iPhone models this year – the iPhone Xs, and iPhone Xs Max. The company also announced a cheaper iPhone XR model along with the next generation of its wearable – Apple Watch Series 4. Additionally, the tech giant claimed that the iPhone is the ‘number 1 smartphone in the world’ with a 98 percent customer satisfaction rate. It also touted the iPhone Xs and iPhone Xs Max lineup as ‘the most advanced iPhone we have ever created.’