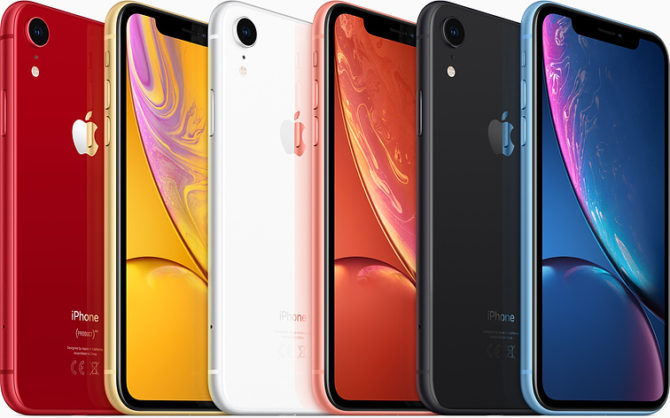 The Apple iPhone XR is powered by the Apple’s latest A12 Bionic processor (touted as the first processor with a 7nm process). The chip contains a six-core CPU and a four-core GPU alongside a new dedicated Neural Engine. Apple claims that the new processor is up to 50 percent faster than the A11 chip.

Apple claims that the iPhone XR can last 90 minutes more than the iPhone 8 Plus. The new handsets come with Type-A to Lightning 5W charger for the power adaptor. Unlike last time, the 3.5mm-to-Lightning dongle will not be included in the box. Both devices support wireless charging.

Unlike the iPhone Xs and iPhone Xs Max, the iPhone XR sports a single camera sensor at the back. It features a 12-megapixel sensor with a six-piece lens, a f/1.8 aperture, and a quad-LED True Tone flash. Camera features include an advanced flicker-detect system, optical image stabilization (OIS) and Focus Pixels.

The 7-megapixel front camera comes with an improved Portrait mode and a f/2.2 aperture. It also includes an IR camera and a dot projector (with a structured light transmitter, micro-projection lens, and a diffractive beam splitter). Additional features include Smart HDR and Advanced Bokeh Depth Control.

The dual-SIM, dual standby smartphone runs iOS 12 out-of-the-box (the second SIM on the device will be offered via eSIM). It comes with Face ID feature (instead of 3D Touch support). However, a Haptic Touch allows users to launch the camera or flashlight by pressing on the home screen.

The advanced Face ID that is powered by the improved TrueDepth camera system (with a faster sensor than the iPhone X).

The iPhone XR features a 6.1-inch LCD Retina display with a resolution of 828 x 1792 pixels, 120Hz touch sample rate, and TrueTone support. It is being touted as the most-advanced LCD panel ever. Apple is calling the edge-to-edge LCD panel the ‘Liquid Retina’ display.

The new handset sports a 7000-series aerospace-grade aluminum build. It comes with an IP67 rating and a display notch on top. It comes in Black, Blue, Coral, White, and Yellow color options. Additionally, the company has added a Red color variant.