With every smartphone manufacturer coming up with new phones every day, it is apparent that you will be bewildered by the numerous choices available in the market. Thus, in this post, we have narrowed down the mid-ranged smartphone options for you. We have compared three best smartphones available in the market with great quality, performance and features to help you decide which one is better for you. Read on to find out best smartphone under Rs. 20,000 which you can buy in India.

You can also check best smartphones under Rs. 30,000 in India here. 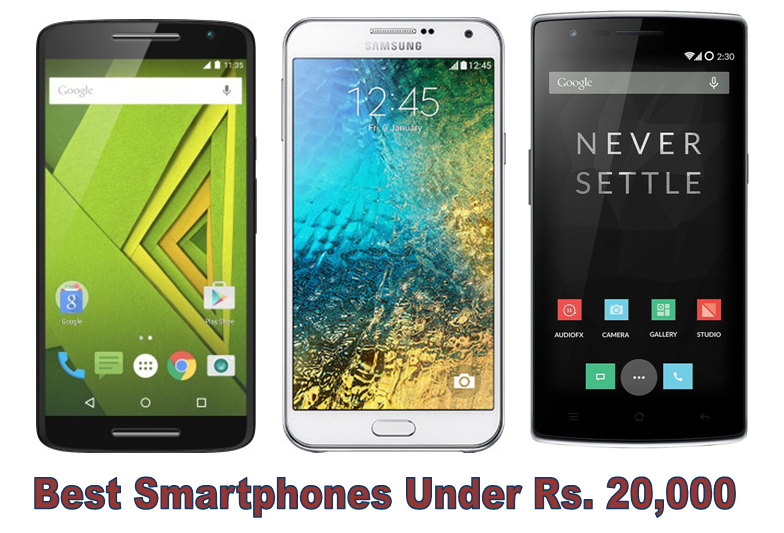 We have listed Motorola Moto X Play, Samsung Galaxy E7 and OnePlus One as the best smartphones which you can buy under Rs. 20,000. (Best buy links in pricing section)

All the three phones are powered by Qualcomm Snapdragon processors. The Moto X Play and Galaxy E7 are paired with 2GB of RAM while OnePlus One houses 3GB of RAM. All three handsets offer high quality performance.

Samsung E7 is loaded with decent features, but looking at the specs sheet of other two phones, Galaxy E7 seems quite less impressive. OnePlus One is a powerful and stunning device in the competition with impressive features like rear camera with dual-LED flash, rich configuration, CyanogenMod 11S based OS, massive 3GB RAM and better display resolution. The Moto X play boasts of its water repellent nano coating, great display quality, stunning 21 mega pixel camera and monstrous 3630mAh battery which won’t let you run out of battery.

Which smartphone among Motorola Moto X Play, Samsung Galaxy E7 and OnePlus One do you think is better? Share your views with us in the comments section below!