BlackBerry’s first 5 inch smartphone is launched in Indian market at INR 39,990. Its first phablet smartphone from Canadian smartphone maker. And it launched this device at very competitive price. This device will be available from next week. This device comes with a 5 inch super Amoled display with 1280 x 720pixel resolution at 295ppi. The pixel  density is pretty low if we compare this device from other smartphone made by  Samsung, Sony and LG’s devices available in this price range. And if you look this device from the front, its almost identical design as we have seen before on HTC One design. So nothing new from the design prospectus. 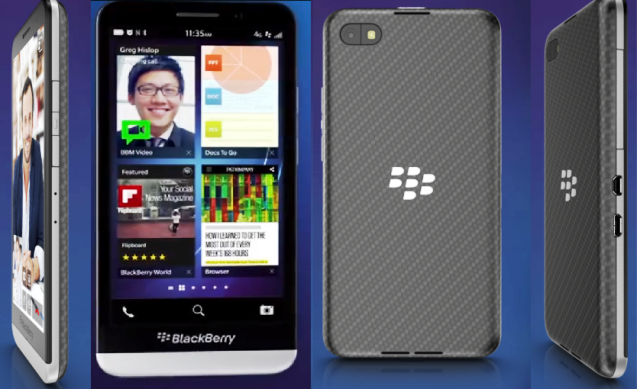 But It has four microphones and two speakers with BlackBerry® Natural Sound technology that makes sounds crystal clear. We have to test if it can beat existing HTC’s Dr.Beats and Sony’s Walkman sound technologies.

BlackBerry Z30 is powered by dual core processor from Snapdragon and for better graphics it has Adreno 320 GPU too. With 2GB RAM on board and 16GB internal storage it may able to run apps smoothly. You can also insert a memory card too for more storage. It also comes with a micro HDMI port so that you can connect it your HDTV or a projector.

There is an 8MP auto focus shooter at back with Led flash and also 2MO front facing camera too. Main camera features Back Side Illumination that gives better low-light performance.8MP camera can record up to 1080 pixels HD videos. With Images Stabilization and Time Shift Mode it can pin point and adjust individuals elements of your images. The fixed focus2MP  front camera also support video calling at 720p with video stabilization.

The Blackberry Z30 runs latest operating system 10.2 from Blackberry. And with Blackberry link software you can connect this phone with your computer or laptop.

Also, Blackberry claims that 2880mAh battery can run up to 25 hours on mixed use and it has up to 18 hours of talk time strength. And it can run last up to 16 days.