Asus India has come up with three new smartphones, launching a new series called ZenFone. The most affordable smartphone in this series is ZenPhone 4  priced at Rs. 5999 in India and then moving ahead ZenPhone 5 8GB at Rs. 9,999 and Zenphone 6 launched at Rs. 16,999 at a launch event in New Delhi India on 9th of July 2014. As the name suggest, ZenPhone 4 has 4 inch display, ZenPhone 5 has 5 inch display followed by ZenPhone 6 that has 6 inch display. Not only the display bumps up as the series go on but features like Pixels, Camera, Processors and Storage too increases as the series go on ahead. We have mentioned all specifications of ZenPhone series smartphone below. All three smartphones come in five colours variants – Charcoal Black, Pearl White, Cherry Red, Sky Blue and Solar Yellow. Pricing and availability of these smartphones is not mentioned by Asus. 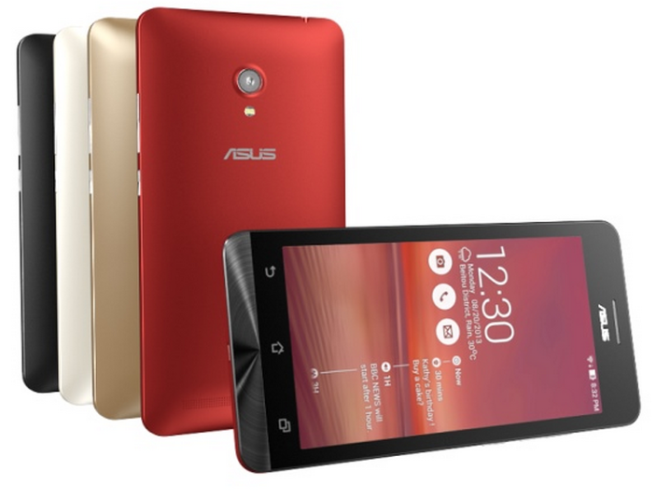 All three smartphones run on dual core processors from Intel with Quad-Thread Hyper-Threading Technology. All have 1GB RAM on board and memory card support up 64GB. All runs on Android Jelly Bean 4.3 with Zen UI from Asus on top. The Asus’s Zen UI is simple user interface that tracks your daily activities and show them on top on lock screen.

It is most affordable smartphone in Asus ZenFone series. Talking about the specifications of Asus ZenFone 4, it comes up with 4 inch WVGA display with 480×800 pixels resolution. It is powered by 1.2GHz Dual Core processor from Intel coupled with 1GB RAM. There is 5-megapixel camera at back with 0.3-megapixel camera at front for video calling. This smartphone is packed with 1170mAh battery.

This will be a mid-range smartphone from Asus. The display of ZenFone 5 is one inch bigger than ZenPhone 4 with 720×1280 pixels resolution­. There is 2GHz dual core processor from Intel coupled with 1GB RAM.it has 4GB internal storage that can further expandable up to 64GB via a SD card. There is 8-megapixel shooter at back for capturing images and recording videos. For video calling there is a 2-megapixel camera at front too. This smartphone is packed with 2050mAh battery.

Asus ZenFone 6 is the biggest smartphone is ZenFone series. It has 6 inch display with 720×1280 pixels resolution. There is 13-megapixel shooter at back along with 2-megapixel camera at front. There is 16GB internal storage which can further expandable up to 64GB via a SD card. The smartphone comes with 3230mAh battery. Other specifications of ZenFone 6 are similar to ZenFone 5.

At the price point and build quality, Asus phones with Intel processors have the capability to challenge the competing phones including the Moto E, Unite 2 & Irix X1 in the Rs. 7,000 segment. At Rs. 12,999, the Zenphone 5 is a head on competition for the Moto G and the likes, while the Zenphone 6 is probably one of its kind product in that size segment which makes it a compelling choice for someone looking for a 6 inch phablet.