HTC launched HTC One M8 globally and at a launch event in India too. The new HTC One M8 follow path of its predecessor HTC One M7. The HTC One was launched in 2013 and it was one of the best smartphone of last year. It was not good success as compare to Samsung Galaxy S4, but design and ultra-pixel camera like unique features made it successful. The processor is bumped up from 1.7Ghz to 2.3GHz. The RAM is same as HTC One. The battery is also slightly bumped up from 2300mAh to 2600mAh. And the most interesting feature of the smartphone, at back there is two rear cameras for better in depth shooting. 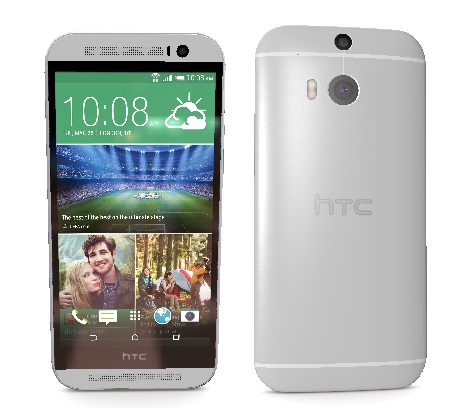 The new HTC One M8 is 9.35mm thing along with 160-gram weight. There is 5-inch Full HD 1080pixel Corning Gorilla Glass 3 display. The design of HTC One M8 is close as the design of its predecessor HTC One. HTC impresses again with its slightly neat and clean design with uni-body metal design. Along with this the smartphone looks premium and comfortable. The 5-inch display smartphone is easy to hold in hand. The density of pixels on smartphone is 441ppi which makes display brilliant and it produces colors more preciously. On top of the smartphone there is two HTC Boom Sound™ Dual frontal stereo speakers placed along with built-in amplifiers, which produces brilliant sound.

Talking about the processor, the new HTC One M8 is more powerful than its predecessor is and come close to the performance of Nexus 5. The new HTC One M8 is comes with preloaded BlinkFeed from HTC. The smartphone runs on latest Android 4.4 operating system along with HTC Sense 6.0 UI on top. There is a additional Adreno 330 GPU too for better graphics processing. There is 2GB RAM that makes device more powerful.

Talking about the camera of smartphone, at back HTC placed two cameras in HTC One M8, one camera is 4-megapixel ultrapixel camera which we have seen on HTC One already, but there is an additional camera too at back, which let you take in depth images. The HTC camera app has lot of features as we have seen already but the image quality it produces, does not impress. The rear camera is coupled with BSI Sensor with HTC  Imagechip 2. The camera is capable of recording up to 1080pixel resolution videos with HDR mode. And at front there is 5-megapixel secondary camera along with another BSI sensor, and able to make video calls at 1080p.

The new HTC One M8 has built in 16/32GB internal memory options along with 128GB memory card support. The smartphone has 2600mAh battery which gives up to 20 hours of talk time on 3G along with 496 hours of standby time on 3G.