Huawei has announced special editions of its Mate 20 Pro and Nova 4 smartphones to mark 200 million shipments. The company has overtaken Apple to become the world’s second largest smartphone seller in the world. Read more to find about Huawei Mate 20 Pro, Nova 4 Special Edition Variants Price in India, Specifications, and Features 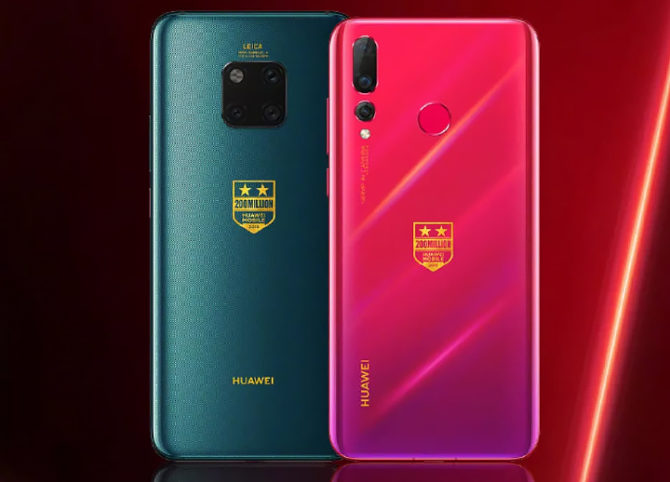 Both smartphones feature a special logo (with imprint – 200 Million Huawei Mobile 2018) at the back. However, the company did not reveal the availability details yet. Sales start in China from January 1, 2019.

Also read: Now You Can Register For Honor View 20 Exclusively On Amazon India

The Mate 20 Pro was launched in India at Rs 69,990 for the 6GB RAM, 128GB storage variant. It runs Android 9.0 Pie operating system with EMUI 9.0 on top. The 4,200mAh battery comes with support for 40W SuperCharge technology. However, it also supports 15W fast wireless charging support. Huawei claims that it is the “world’s first wireless reverse charging” technology on a smartphone.

The new handset was launched in China earlier this month. It is not yet available in India. The Nova 4 is powered by an octa-core (4 x 2.36GHz Cortex-A73 cores + 4 x 1.8GHz Cortex-A53 cores) HiSIlicon Kirin 970 processor along with 8GB RAM and 128GB internal storage (non-expandable). It is backed by a 3,750mAh battery.

For selfies and video calling, the smartphone features a 25-megapixel front camera (f/2.0 aperture, EIS) that is housed in the display hole (4.5mm wide). For security, the Huawei Nova 4 comes with a Face Unlock feature and a rear-mounted fingerprint sensor.

Recently, the Chinese company has been in the middle of controversies. According to International Data Corporation (IDC), Huawei now has a 14.6 percent global market share. To celebrate this achievement, the company has announced commemorative editions of the Huawei Mate 20 Pro and Huawei Nova 4.

“This is a new starting point and we will continue to work hard to improve our products and services to achieve higher shipments in the future,” said He Gang, President, Huawei.