Adding one more OEM to the budget Android range running Android JellyBean, Intex launched their flagship Android smartphone called as the Aqua HD that appeared on the official website earlier this week. The phone now is ready to ship from the online retailer Infibeam in India for Rs. 15,900. 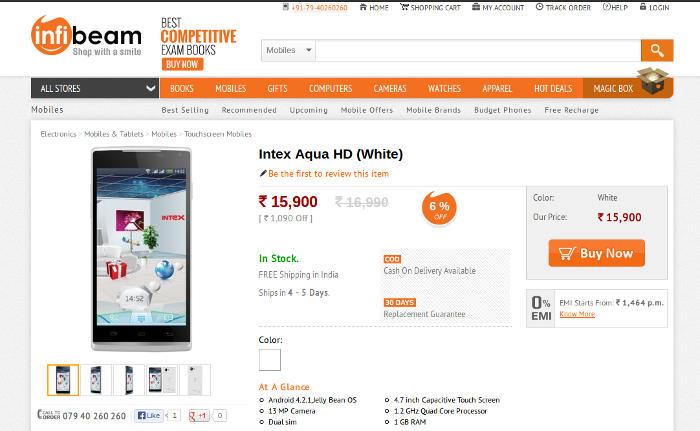 Intex Aqua HD features a 4.7-inch (1280 x 720 pixels) HD capacitive touch screen display, having a 1.2 GHz quad-core MediaTek 6589 processor and runs on Android 4.2.1 Jelly Bean. It also comes with a 13-megapixel auto focus rear camera with LED flash and a 5-megapixel font-facing camera. It has the dual sim standby feature with 3G on one sim and usual GSM on the other. It has 1GB of RAM and 4GB internal memory out of which just 923MB comes under user’s available free space. It is powered by a 1800 mAh battery. More specifications can be read below.

The Intex Aqua HD comes in Black and White color options and is available from Infibeam today. It has been priced at Rs. 15,900 which can go a little low depending up on the response from the public.