You must have recently came across some stories about Jio stating how Airtel is not the fastest network in the country which is otherwise claimed in their latest campaign. But what is the reason behind this argument? Does this argument hold true? Jio vs Airtel – Who is the real winner in the mobile data war? Let’s find out in this post! 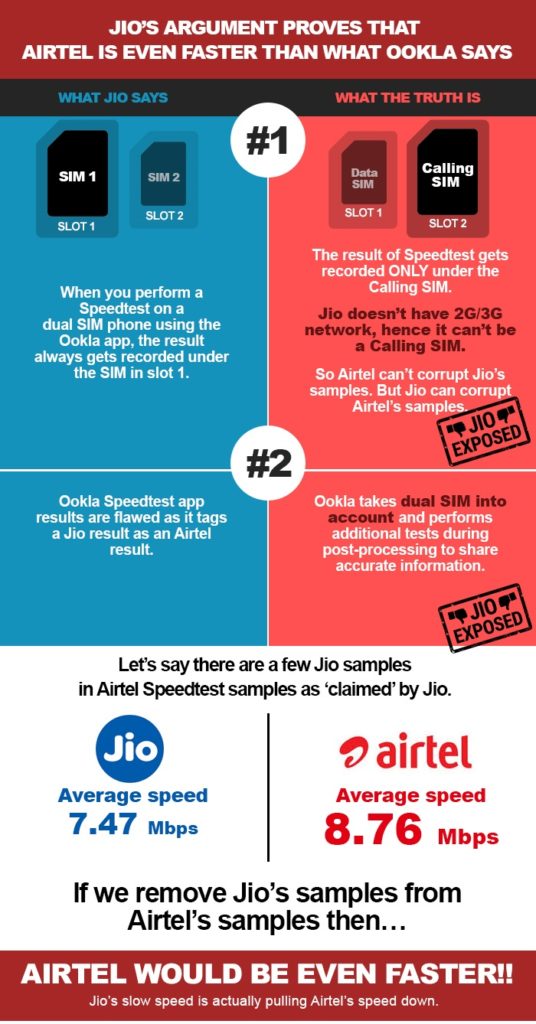 Well, all this started when global leader in internet testing, Ookla awarded Airtel India to be the fastest network in the country. Immediately after the word was out, Jio challenged the claim by saying that a dual SIM phone tags a Jio result as Airtel result and hence, the it’s inaccurate.

In simpler term, Jio states that in dual SIM phones, the results are attributed to the SIM slot 1, even if the data SIM is in slot 2. This argument has attracted a lot of doubts concerning its veracity.

Even if we agree to the argument, factually, the result in speed-test app is tagged on the basis of what is called as the “calling” SIM – the SIM which is used for voice calls and not for data. So, if the SIM in slot 1 is Jio’s data SIM while that in slot 2 is Airtel’s voice SIM, then the results are attributed to SIM 2 and not SIM 1.

Let’s take up an example of a dual SIM phone with Airtel and Jio SIMs. Since the SIMs can be configured as 4G data or voice only (2G/3G no data ), there will be two possible combinations:

It is only the scenario 1 where Jio results might have been attributed to Airtel. However, that is not feasible. Since it is not possible that a Jio SIM is only configured as a voice only SIM, the corruption of samples can only happen from Jio to Airtel and not the other way round.

Eliminating the combinations that are not feasible, we are only left with:

If the aggregate speed in pool 1 is less than that in pool 2, it is evident that Airtel samples have a higher speed. Since, despite being polluted with a lesser speed samples the aggregate is higher.

Furthermore, if we eliminate the polluting samples, Airtel aggregate would go even higher than before. Needles to say, this basic maths proves that Airtel is the fastest (and even faster) network.