Domestic mobile phone maker Karbonn has launched its Karbonn Titanium S25 Klick in India. Featuring a 13 mega pixel rear camera and 5 mega pixel front facing camera, this smartphone comes as an affordable offering from Karbonn for selfie lovers in India. With Rs. 7,820 price tag, it looks value for money for the buyers.

Karbonn Titanium S25 Klick is powered by 1.3 GHz quad-core processor and runs on Android 4.4 KitKat operating system. This dual SIM phone features a 5-inch 720p HD display. It sports a 13 mega pixel rear camera and a 5 mega pixel front facing camera. Both the cameras provided in this phone makes this smartphone superior than others in the same price segment. The 5 mega pixel camera is most likely to be admired by selfie lovers in Indian smartphone market. It is equipped with  1GB of RAM and 8GB of internal storage (Expandable up to 32 GB via microSD card). It packs a 2000 mAh battery. Connectivity options include 3G, WiFi and Bluetooth. 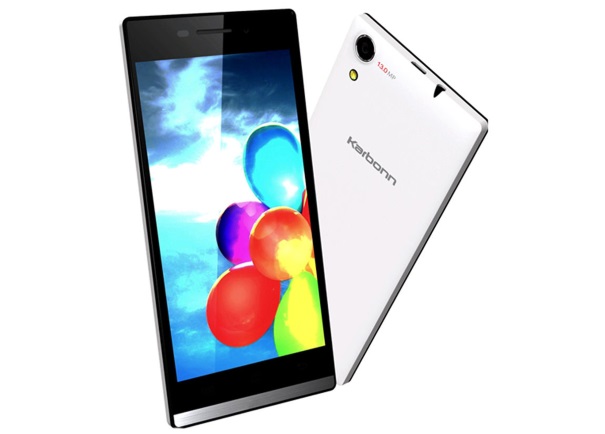 This smartphone will compete with  Alcatel OneTouch Flash and Xiaomi Redmi Note in India. Alcatel OneTouch Flash priced at 9999/- is powered by 1.4 GHz Octa-core processor and runs on an Android 4.4.2 KitKat operating system. It has a 5.5 inch HD display with 720 x 1280 pixels resolution. It features a 13 mega-pixel rear camera and 5 mega-pixel front camera. It also features hotknot technology which transfers data with the help of capacitive touch panels. It packs a 3200 mAh battery.

While Xiaomi Redmi Note draws power from 1.7 GHz Octa Core processor and runs on Android 4.2. It features a 5.5 inch display with 720 x 1280 resolution. It is also a dual SIM phone with 3G and Wi-Fi connectivity. It comes with 2 GB RAM and 8 GB inbuilt storage (Expandable upto 32 GB). It sports a 13 mega pixel rear camera with flash and a 5 mega pixel front facing camera. The features of these smartphones are nearly same except the disappointing Android 4.2 operating system of Redmi Note. Also, despite so many similarities these rivals phones are priced slightly higher than Karbonn Klick.

The smartphone makers in India are manufacturing the smartphones with plethora of innovative features, good cameras, superior bulid quality and so on. Now with every handset maker trying to get hold of Indian buyers, let’s see what this new smartphone offering from Karbonn will do in the market. This smartphone is available at a very competitive price of Rs. 7,820/-.