Lenovo has launched its Ideacentre Stick PC 300 in India. This latest offering from Lenovo transforms any HDMI TV or monitor into a full-fledged PC. Users will just have to plug this device in the HDMI port of TV or monitor to transform it into PC.

The Ideacentre Stick 300 is so small and handy that it even fits into user’s palm. It is light weight, measures mere 100mm in length and can be kept in pocket while travelling. Using this device, users can perform various actions such as check their e-mails, watch movies, play games, browse internet and more on the HDMI TV or monitor. 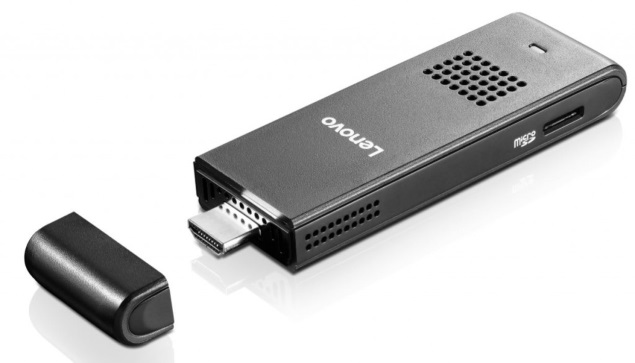 As for specifications, the Lenovo Ideacentre Stick PC 300 is powered by a quad-core Intel Atom processor paired with 2GB of RAM. It supports Windows 8.1 and Windows 10 with Bing for Stick PC. There is 32GB of inbuilt storage which can be expanded up to 128GB using microSD card. Connectivity options include Wi-Fi and Bluetooth. The device also comes with mini HDMI and USB port to connect peripherals.

Priced at Rs. 9,999, the Ideacentre Stick PC 300 is now up for pre-orders in India exclusively through Lenovo’s official online store thedostore.com. Shipping will start from September 21, 2015.

Earlier this year, in July 2015, Intel also launched its Compute Stick in India for Rs. 9,999.  The Compute Stick comes in two variants- Windows 8.1 Bing and Linux variant. It is powered by a quad-core Intel Atom Z3735F processor. The Windows 8.1 variant supports Windows 8.1 OS with Bing; houses 32GB of internal storage and 2GB of RAM. The Linux variant on the other hand runs Ubuntu 14.04 OS; packs 8GB of inbuilt memory and 1GB of RAM. It comes with Wi-Fi, Bluetooth and USB port as connectivity options.