The LG L40, L70 and L90 were launched at the Mobile World Congress this year in February. Among all three smartphones the LG L40 and L70 was launched in India recently and available across country. Now LG comes up with another L series smartphone, and added a new device in L series called LG L65 dual. The LG L65 Dual is available on the official website of LG in Russia. The smartphone is available at a price of RUB 7,490 in Russia which we roughly translate it in Indian Rupees, it will cost approximately INR 12,500 that makes it a budget smartphone. 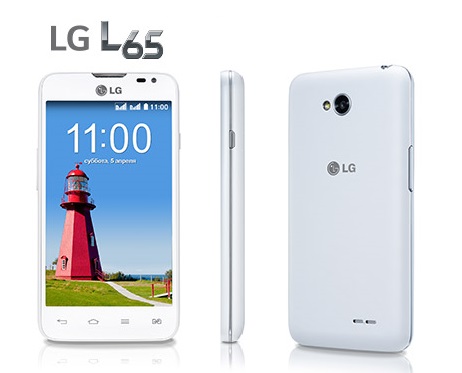 So if this smartphone is going to be a budget smartphone and LG is going to launch it under INR 14,000 price mark than the biggest competitor of this device will be Motorola’s Moto G. And if we look at the specifications of both devices the LG L65 lacks of processor as compared to Moto G. The Moto G comes with quad core processor from snapdragon, on the other hand LG L65 comes with only dual core processor from Snapdragon. But as the LG has not said any word about the pricing and availability of the device, we cannot say much about this device rather than talking about specifications.

So let’s have a deep look about specifications of LG L65. The 4.3-inch IPS LCD display smartphone with WVGA 480*800pixel resolution display, the smartphone weighs 126 grams and it is 9.6mm thick. The pixel density of the display is 217ppi.

The smartphone is powered by 1.2GHz dual core processors from Snapdragon along with a graphical unit Adreno 302 GPU on board too. The smartphone has 1GB of RAM and its running on latest operating system from Google that is Android 4.4 KitKat.

On the back of smartphone, there is a 5-megapixel multi-point auto focus camera along with LED flash. There is a VGA front camera unit too for video calling and self-portrait.

The internal storage of LG L65 is only 4GB along with 32GB memory cards support too. Talking about the connectivity, the LG L65 is a dual SIM smartphone along with both SIM GSM connectivity. On the other hand it has 2G, 3G, Wi-Fi, Wi-Fi Direct, Bluetooth 4.0, GPS and micro-USB connectivity as well.

The LG L65 is packed with 2100mAh battery. The smartphone comes in two different colors- Black and White. LG has also made some smart covers for this device called Quickwindow. The Qucikwindow provides quick access to the clock, whether, music and more. Like other smart covers, these covers also allows a person to pick a call or reject call from the cover.