LG has teased its new LG UX 4.0 through a video while also announcing that LG’s upcoming flagship phone G4 will be launched featuring the same interface. The new interface comes with enhanced customization options and looks similar to the previous interface. The new interface is based on human-centered philosophy, which is much simpler and convenient to use. says LG. It comes with several innovative features like Quick Shot, Smart Board and upgraded Gallery and Calender apps. Read on to find more information on LG UX 4.0 interface. 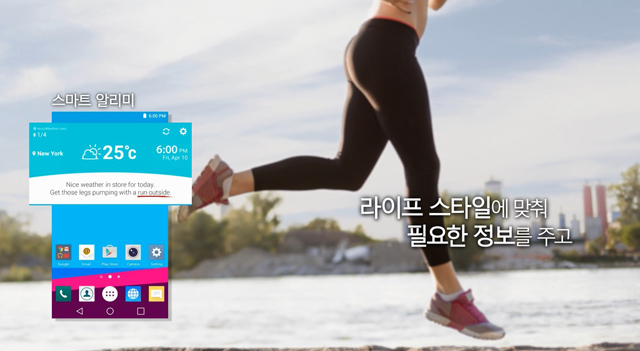 Quick Shot feature allows the users to capture image even when the phone is locked by just pressing volume button at the back of the phone twice. Expert Camera Mode clubs the images taken at a particular location into an album. Smart Board is aggregation of information from various apps like health, calender and music in a single widget. Smart Alert is another intuitive app which besides telling the users about basic weather conditions, also suggests them what they can do on that particular day based on their interests and routine like- they can play basketball on a sunny day. Calender and Gallery apps have also received upgrade.

LG says that its upcoming flagship LG G4 will come with the UX 4.0 interface. As for specifications, the LG G4 is said to be powered by Snapdragon 810 SoC coupled with 3 GB of RAM. The handset will run Android Lollipop operating system. It is rumored to feature a 5.5-inch QHD display. On storage front, the handset is likely to house 32 GB of inbuilt storage. The G4 is rumored to sport a 16 mega pixel rear camera with dual-LED flash and an 8 mega pixel front facing camera. The handset is likely to retain the curved body design just like the LG G Flex 2 smartphone and measure 148.9 x 76.5 x 9.9 mm in dimensions.