Choosing a right smartphone that not only suits your needs but also comes in your price range can be a little demanding considering the options that you might have in any segment. Today we are going to compare the four phones to help you decide your best pick. These phones are Micromax campus, Zen701 FHD, Gionee ElifeE5 and Gionee ElifeE6. These all have similar specs and features with some unique offerings on all of these phones. We look into these aspects in detail and share with you which phone suits you best.

We also share a detailed comparison video, which is embedded below with detailed benchmarks and features comparison including camera sample comparisons. 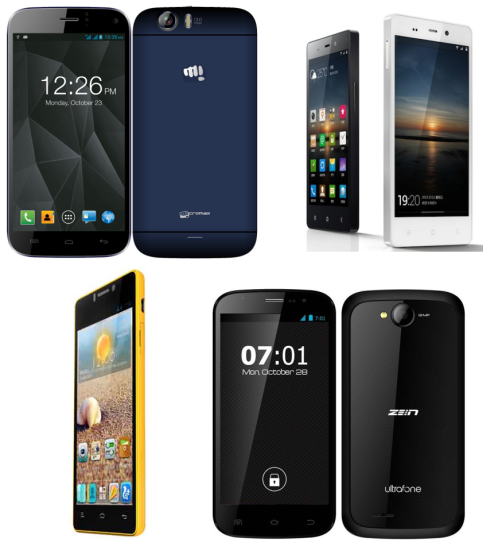 We are sure you have got some idea about the phones configurations and the hardware fro the table above however we would further like to tell you the difference or similarities in detail. Read on.

While all these phones have the same processing unit, same 4.2 android versions and come in the same mid segment range. The differences are many:

Elife E5 is the slimmest of all phones at 6.5 mm, very sporty and vibrant; it has a unibody structure and 720 p display. The contrast ratio of this phone is very nice. With 3.5 standard audio Jack and 8 mp rear camera, this phone has a strong build and is very strong with polycarbonate shell. This is also the least expensive of all.

One interesting fact we would like to bring to your notice is that while two phones, zen 701 FHD and Gionee E5 have 1 GB RAM and the other two have 2 GB RAM, the 1GB phones were performing equal or better than their counterparts. When we spoke to Zen team, we found that the Mediatek chipset is better optimised with 1GB and anything more than that does not get utilised properly and this can be clearly be seen with these phones performances.

Sound wise we recommend both Gionee Elife E6 as well as E5 as they both had the most clear sounds however from the design perspective E6 is better because the speakers in this phone is at the bottom.

But because E5 has lower display resolution and smaller screen, it offers lesser consumption of battery and thus a slightly better battery time.

E6 also optimises on the synchronisation technology and has good battery life.

Other two give decent battery life and should last about a day for all the moderate users.