Lenovo-owned Motorola has finally launched the much-awaited Moto Z2 Force smartphone. The new handset offers high-end specs and unique features. Can it take on the flagship devices in the market? Google Pixel XL is one of the best Android smartphones. Let’s see how the new Moto device fares against the Google flagship. Read more to find about Moto Z2 Force Vs Google Pixel XL – Which Phone Is Better? 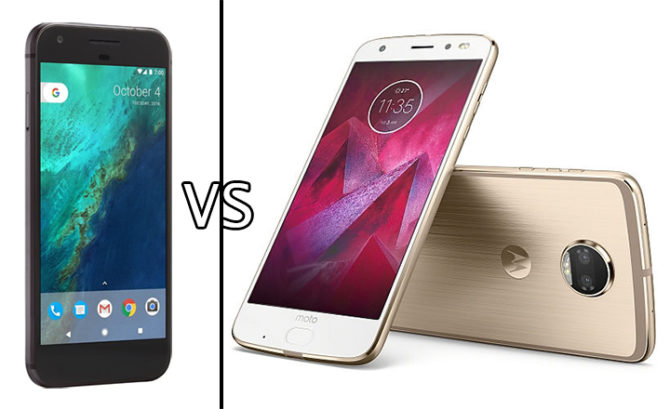 In terms of storage, the Google Pixel XL comes with either 32GB or 128GB of storage (non-expandable). Whereas the Moto Z2 Force comes with 64GB internal storage which can be further expanded via a Micro SD card.

Both smartphones feature 5.5-inch AMOLED displays with a QHD resolution (2,560 x 1,440 pixels). Additionally, the Z2 Force comes with ShatterShield technology for protection. While the Moto Z2 Force is backed by a 2,730mAh battery, the Google Pixel XL comes with a slightly larger 3,450mAh battery. Both devices support a fast charging technology.

The Google Pixel XL has been considered as the best camera module in smartphones ever. It features a 12.3-megapixel sensor with f/2.0 aperture, electronic image stabilization (EIS), phase detection autofocus (PDAF), and laser autofocus.

On the other hand, the Moto Z2 Force features a dual camera setup (12MP + 12MP) with f/2.0 aperture, phase detection autofocus (PDAF), laser autofocus, and manual controls like ISO control. Dual cameras allow you to capture nice bokeh and depth of field. However, it remains to be seen how the new Moto handset performs in the real world situations.

The Google Pixel XL features a unique design with a half-glass back. The fingerprint sensor is located on the back panel. Alternatively, the Moto Z2 Force sports a slim design with an option of attaching Moto Mods. You can attach extra modules like a Hasselblad camera mod, extra battery, etc. on the device’s back. While the Google Pixel XL features a headphone jack, it is absent on the Moto Z2 Force.

Both devices feature competitive specs and features. While the Moto Z2 Force comes with the better processor, it suffers from low battery capacity. However, it offers an additional option of Moto Mods. On the other hand, the Google Pixel XL is bound to offer better software experience with quick updates. Which of the two devices will you go for? Let us know in the comments section below.