Lenovo has announced new line up of Lenovo Yoga Convertibles & Tablets at CES 2015. This new line up of Lenovo includes 11-inch and 14-inch Yoga 3 convertible models, ThinkPad YOGA 12-inch, 14-inch and 15-inch convertibles with optional Intel RealSense 3D camera and 8-inch Yoga 2 tablet with Windows featuring Lenovo AnyPen Technology which enables the users to use anything ranging from pencils or pens as stylus. These tablets are designed in a flexible manner to take the users experience to a whole new interactive level. Read on for more detailed information about new Lenovo Yoga convertibles & tablets. 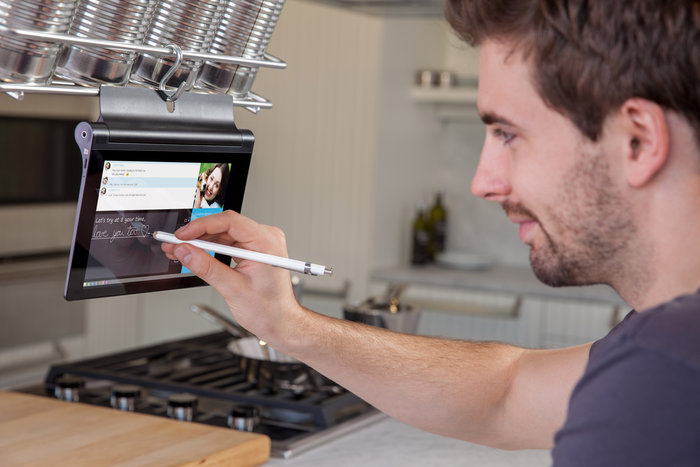 Yoga 3 14-inch model, despite its larger size is built on 13-inch chassis with 18.3 mm thickness, while 11-inch model weighs 1.1 kg with 15.8 mm thickness. Both the devices offer 360 degree flexibility to the user with their YOGA two-hinge design. These devices feature four unique modes for the users- Laptop, Stand, Tent and Tablet. 14-inch model is equipped with 5th Generation Intel Core i7 processors, runs on Windows 8.1 operating system with full HD screens and Wi-Fi 802.11 a/c support.

This device is powered by Intel Atom processor. As the name suggests, it features an 8-inch full HD display and runs on Windows 8.1 operating system. Yoga 2 tablets comes with AnyPen technology which enables the users to use any pen or pencil according to their convenience to use the tablet. The user will not have to rely on their fingers or styluses for using this tablet. It comes with four modes- Hold, Tilt, Stand, Hang and further packs a powerful battery which can survive up to 15 hours. It is also equipped with several entertainment features like two front facing speakers, Wolfson Master Hi-Fi noise reduction and Dolby audio.

Additionally, Lenovo has also announced its ThinkPad line up with ThinkPad YOGA 12-inch, 14-inch and new 15-inch convertibles focusing on the business class people. It comes with Intel RealSense 3D camera which allows video conferencing and enables the users to scan small objects for 3D printing. Specifications of ThinkPad Yoga models include  5th Generation Intel Core i7 processors, Windows 8.1 operating system. For storage purpose, these models will come with large storage up to 1 TB, while it also features Dolby Home Theatre v4.