It seems like Nokia has re-entered the smartphone market with a constructive plan. The company has already launched Nokia 3, Nokia 5 and Nokia 6 handsets in the country. Recently, Nokia unveiled its first high-end Android smartphone dubbed Nokia 8. The premium all-metal design comes with high-end specifications, a Carl Zeiss dual camera setup and stock Android OS. Now, the new handset is about to hit the Indian market. Excited about a new entry in the high-end segment? Apparently, the new smartphone has already been listed on Amazon India. Read more to find about Nokia 8 Price in India, Specifications, and Features 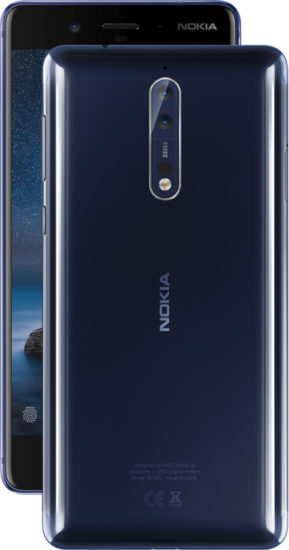 HMD Global is expected to launch its flagship Android smartphone in India at an event in New Delhi. The company had sent out invites for a New Delhi launch event with the tagline – ‘There are two sides to every story. Don’t miss out on yours.’ The Nokia 8 comes with a ‘Dual-Sight’ feature that allows you to capture video from the front and rear cameras simultaneously.

The Nokia 8 has already been listed on Amazon India, ahead of the launch. According to the new listing, the Nokia 8 is priced in India is Rs 36,999. It points users to a ‘Notify Me’ page.

The Nokia 8 was initially launched at 599 Euros (approx Rs 45,300). As of now, HMD Global is expected to bring only the 4GB RAM/ 64GB storage variant to India. The flagship device will compete with the bigwigs like Samsung Galaxy Note 8, Apple iPhone 8 and OnePlus 5.

Also read: Here’s All We Know About The Alleged Nokia Flagship, Nokia 9, Till Date

The Nokia 8 features a 5.3-inch IPS LCD display with a Quad HD resolution, 2.5D Gorilla Glass 5, 700Nits of maximum brightness and Nokia’s trademark Glance Screen. It is powered by a Qualcomm Snapdragon 835 processor along with 4GB RAM and Adreno 540 GPU.

The new handset comes with an innovative heat management solution with a full-length graphite shielded copper cooling pipe. It is backed by a 3090mAh battery with Quick Charge 3.0 support. The 64GB internal storage can be further expanded up to 256GB via a microSD card.

In this segment, Nokia has collaborated with the well-known Carl Zeiss. The Nokia 8 sports a ZEISS powered dual camera setup with phase detection autofocus (PDAF) and a dual-tone flash. It combines a 13-megapixel RGB (color) primary sensor with optical image stabilization (OIS) and a 13-megapixel secondary monochrome (black and white) sensor. Both cameras come with f/2.0 aperture.

Also read: Nokia 3 India Launch: All You Need To Know

The Nokia 8 runs the stock Android 7.1.1 Nougat operating system out-of-the-box (without any additional pre-installed apps and services). Nokia claims that it will be one of the first non-Google brands to release Android O to their smartphones.

The Nokia 8 sports an all-metal design made from a single block of aluminum. It is just 4.6mm thick at the edge. A fingerprint sensor is embedded into the home button. It sports USB Type-C port and dual speakers on the bottom edge. The Nokia 8 comes in four color options – Polished Blue, Polished Copper, Tempered Blue, and Steel.

Instead of IP68 dust and water resistance, the Nokia 8 comes is splash proof (IP54). It will be able to withstand light rain and splashes of water. Connectivity options on the device include 4G LTE, Wi-Fi 802.11 a/b/g/n/ac with MIMO, Bluetooth 5.0, GPS/AGPS, GLONASS, NFC, and a 3.5mm headphone jack.

The Nokia 8 is the first smartphone to offer ‘Dual-Sight’ video. The new feature allows you to use the front and rear camera at the same time in a split screen view. It works for both photos and videos. The new handset can live stream the Dual Sight video natively and in real-time to YouTube and Facebook.

Also read: Nokia 6 Vs Moto G5 Plus Comparison: Which Phone is Better?

With the Nokia 8, the Finnish brand is expected to take on high-end offerings by the likes of Apple, Samsung, Google, OnePlus etc. While Nokia does have a nostalgic advantage, it can only take it so far. HMD Global has a long fight ahead before becoming a top player in the smartphone market. It remains to be seen if Nokia 8 will be that breakthrough device for the brand. Are you waiting for a flagship device from Nokia? Let us know in the comments section below.