Different people have different perceptions of the same concept or idea. Whenever we see something out of the standard league, we make opinions about it. Nokia X is one such product which is very different from other Android phones which we have used in the past. In fact, by the look of it and the interface, it does not feel like an Adroid phone at all. But the fact it that it runs on AOSP (Android Open Source Platform) software and is an android phone from the core. It can run android apps, but what is missing is the Android services by Google. It does not run services like Google Play Store, the Gmail App is also not supported.

The feature I personally miss the most is Google contact sync (which works on Windows Phones via email accounts), which is not supported on Nokia X. In this article, I share with you my experience with Nokia X for around 10 days of use. I have been using android phones for more than 2 years now. I also share some stress tests which I did on my Nokia X including a Nokia X drop test on hard marble floor and another test in which we pour cola over Nokia X and check its water resistant capabilities (which are not even claimed by Nokia). In this article, we share with you Nokia X Review in detail from a customer/ users perspective. 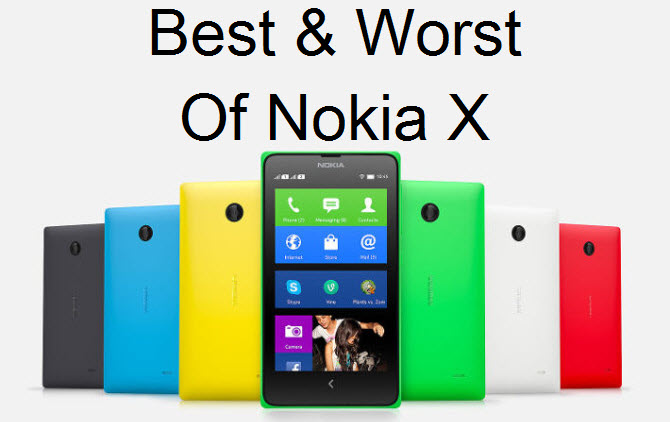 Nokia X uses a custom interface with the similar design as we see on Asha and Windows phone series. The icons are placed as tiles of different colours and also has a fast lane feature in which you can slide from right to left on the home screen and see recently used apps, recently dialed numbers etc. It is very convenient and simple to access recent actions and apps. It also has some great music services like Nokia Mix radio which works nicely, offline Here maps app for offline navigation (no need to use data connection while navigation) to name a few.

Some of the annoying parts of the experience is that you can not sync contacts with Google, even via email account settings which is allowed on Nokia Lumia windows phones. Also there is no Google play store. You can either install what is available on Nokia’s store for Nokia X or install third party stores and source apps from there. Lets look at all these positives and negatives in details in the sections below.

Nokia X Review- Why Nokia X Is Better Than Other Android Phones?

Nokia is well known for its build quality. There are many jokes about Nokia phones about their strength as much as a solid rock. The Nokia X carries forward the same heritage and legacy of well built Nokia phones. The structure is very sturdy with a rear shell which comes in many vibrant colours and is very strong poly carbonate material which is not only strong, but also resistant to scratches and finger-prints. The surface being a matt finished one on the Nokia X, it does not attract dust or fingerprints easily.

We really did some physical assault to our Nokia X by dropping it from various heights- knee height or a chair height, pocket height or waist height and lastly from ear height or shoulder height. The phone did survive all three drops that too on a hard marble floor. Below is a video of the same so that you can see the strength of its design for yourself.

However Nokia does not make any claims of Nokia X being water resistant officially, but the design is such that there are very few ways in which water can seep into this phone. This design attribute makes it fairly resistant to accidental water spills, coffee or beer spills on the Nokia X. We tested our Nokia X with Cola and it managed to survive easily, see out liquid spill test video below:

Nokia has kept the interface very simple, there are not multiple home screens to confuse, just two screens, one vertically scrolling screen with tiles for all the apps, where you can create folders and organize your apps in tiles. You can also resize tiles, add some widgets to make it customized to your taste and need. The other screen, which appears when you scroll left from right edge is fast lane. The fast lane here is same as we see on Asha phones, it holds the history of recent activities, also shows your meetings and other important notifications.

This interface may look too bland for an Android user switching from some other android phone, but once you start using it, it seems very simplified and easy to use. The fastlane can be set to show only certain kind of updates under the fastlane settings so that you can tailor it to your requirements.

This is something which I must say is one of the most compelling factors to buy a Nokia X. Nokia services like Mix Radio, which is free to use on Nokia X devices, allows you to download up to 4 mixes for offline listening. When you are online, you can listen to a large variety of music based on genre or artists or mood. This is a huge convenience for music lovers. I tested it and became really fond of the same in just 2 days. I selected one of the artists I like and it pulls the similar artists’s music automatically. The theme of songs it selects automatically is very similar to the music you select at first, so it gets some really nice songs for you without any hassle of downloading music or purchasing CDs.

Nokia Here maps and Nokia Drive are also two very useful apps which I like very much, it lets you allow offline maps for a city or country or entire continent based on your need and use it for offline navigation. This means that you need not have 3G/2G data connectivity and still you can use the navigation, turn by turn maps without any hassles.

Nokia X Review- Why Nokia X Is Worse Than Other Android Phones?

1. No Google Services & No Play Store

When I came to know that Nokia X is an Android phone, I immediately had an image in mind of it having Google account sync, contact sync, Gmail, Google Maps and Google Play store. But to my surprise, none of these services are supported on Nokia X. The software on Nokia X is based on android platform, but it uses Nokia and Microsoft services for its apps, maps and email services. You can however configure a Gmail account, but it does not sync google contacts via email account (which is supported on Nokia Lumia series).

There are alternatives to all the apps and even the Google Play store, but you may have to hop from one store to another for certain apps. Also some functionalists may cause concern, like syncing your contacts with Google account is not supported. So I had to transfer the contacts using Contact Transfer App via Bluetooth.

Also installing Whatsapp was also bit tricky, but not very difficult. I could get it from a third party store called 1Mobile Store, but it may be cumbersome for someone who is not very good with tech stuff. I am embedding some of this videos below for your convenience.

When it comes to price value for money, Nokia X does justify the price based on the build quality and design, but in terms of CPU, RAM and performance, we find that it is behind the phones which are priced in similar price range. There are plenty of low and mid-end android phones which feel faster than the Nokia X. At times when we ran too much applications and heavy apps, the phone goes slow easily.

3. Needs To Catch Up On Apps

No doubt you can install hundreds and thousands types of apps on Nokia X by installing an apk file via memory card, data cable or downloading them from a third party store, but for a not-so-techy user, this experience is still not as seamless as we find on Google Play store. We would like to see some sort of merging of the store provided on Nokia X supplying the external store apps under the same store app. Also there should be some robust security mechanism to make sure that “bad apps” don’t make their way to Nokia X. This is just the beginning of android platform for Nokia, so we hope that these shortcomings will be addressed in future devices and software updates.

The rear camera on the Nokia X is a 3 MP fixed focus unit and does some basic photography. There is no front facing camera, so making video calls and video conferences may not be possible. However it is not a big turn-off for us as at this price point, most phones don’t offer good cameras.

Nokia X is a mixed bag with some positives and some negatives. Overall, its a good phone for someone seeking a strong, simple, easy to use phone. The software interface is simple, music apps (Nokia mix radio) are very good, build quality is exceptional in the price segment, feel of the phone is very good. If you can live without Google services and are looking for a phone for tough use, playing some moderate games, listening to music, occasional picture clicking, staying online and browsing internet, then Nokia X will not disappoint you. At the price at which it is being sold, it is probably one of the best built phones you can get. You can buy it online here with great discounts and offers.