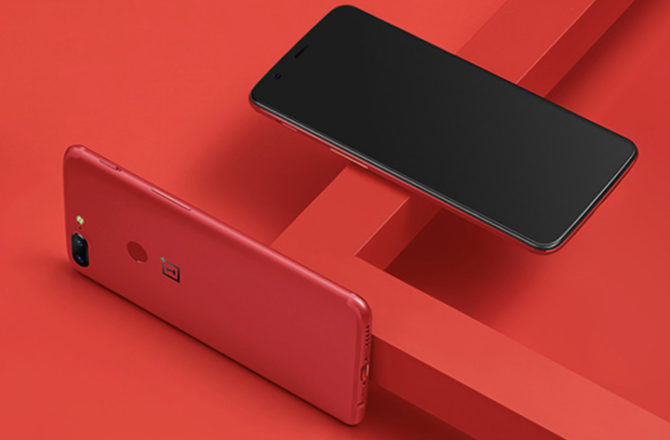 The OnePlus 5T Lava Red variant is priced in India at Rs 32,999 for the 6GB RAM/ 64GB internal storage variant. An 8GB RAM/ 128GB storage variant will cost you Rs 37,999. It will be available via Amazon.in from 20th January. Registrations start from 11th January.

The OnePlus 5T is backed by a 3300mAh non-removable battery with Dash Charge (5V, 4A) fast charging technology. It is powered by a 2.45GHz octa-core Qualcomm Snapdragon 835 processor.

The camera setup comes with a dual-LED flash. It allows you to record 4K video at 30fps and full HD (1080p) videos at 60fps. Additionally, it is equipped with ‘Intelligent Pixel Technology’, which merges four pixels into one to reduce noise and improve clarity. The redesigned setup on OnePlus 5T switches to the secondary 20-megapixel camera in low-light conditions.

The front camera is identical to the OnePlus 5 in all aspects. The 16-megapixel selfie cam features a Sony IMX371 sensor with 1-micron pixels, an f.2.0 aperture, and full HD (1080p) recording capabilities.

Also read: Honor 9 Lite Expected To Hit Indian Markets in January – All We Know So Far

The OnePlus 5T runs Android 7.1.1 Nougat operating system with OxygenOS 4.7 on top. It comes with a Face Unlock feature (based on advanced facial recognition algorithms) which can securely unlock the smartphone in 0.4 seconds. The new feature will work as an authentication method for payment apps.

Additional features include a Reading Mode, Parallel Apps, and Gallery Maps. You can also long-press the fingerprint sensor to take a selfie, and swipe to bring up the notification shade. Sensors on the device include an accelerometer, ambient light sensor, digital compass, gyroscope, proximity sensor, and an RGB sensor.

The OnePlus 5T was launched in Midnight Black colour option. Later, the company added a Lava red and Star Wars Limited edition. A Sandstone White variant of the OnePlus 5T was also launched in China and the US. Are you excited about the upcoming Lava Red variant? Let us know in the comments section below.