The OnePlus is expected to launch the OnePlus 6T on October 30. The upcoming handset is tipped to feature a motorized pop-up selfie cam and dual rear cameras. Several leaks also hint at a waterdrop Notch and in-display fingerprint sensor. The OnePlus 6T is now available for pre-bookings. Read more to find about OnePlus 6T Price in India, Specifications, and Features The OnePlus 6T will be launched on October 30. Interested customers can now pre-book the device via Amazon India, Croma outlets and OnePlus exclusive offline stores. Sales start at 12 pm IST (Noon) on November 2.

You will have to purchase a Rs 1,000 Amazon e-Gift Card (to be redeemed against the OnePlus 6T) from the dedicated pre-bookings page. Just select the select the OnePlus 6T ‘Design’, and choose the Rs 1,000 denomination. The gift card will be sent to you via email. 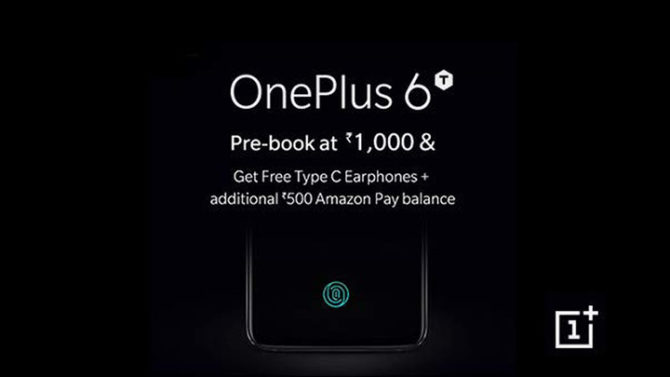 OnePlus is also offering multiple freebies to users who pre-book the device. This includes a Rs 500 cashback (credited to your Amazon Pay account by November 6) and a coupon code to purchase the OnePlus Type-C Bullet Earphones (worth Rs 1,490).

Click here to pre-book the OnePlus 6T on Amazon.in.

The OnePlus 6T is tipped to sport an aluminum frame with a glass back. As per new leaks, the upcoming handset will feature a similar design to the upcoming Oppo F9. It sports a waterdrop-like notch on the front with no space for the LED notification light.

Additionally, the rear-mounted fingerprint scanner will be replaced with an in-display fingerprint scanner called the ‘Screen Lock’. The device might also feature 3D facial recognition. Previously, it was expected to feature motorized pop-up selfie camera and 90 percent screen to body ratio.

As per the latest leaks, The upcoming handset measures 157.5 x 75.7 x 8.2mm. The position of the power, alert slider, and volume keys remain unchanged from the OnePlus 6. However, the OnePlus 6T will not have a 3.5mm headphone jack.

What do you think of the new features on the upcoming handset? What would you like to see in the OnePlus 6T? Let us in the comments section below.