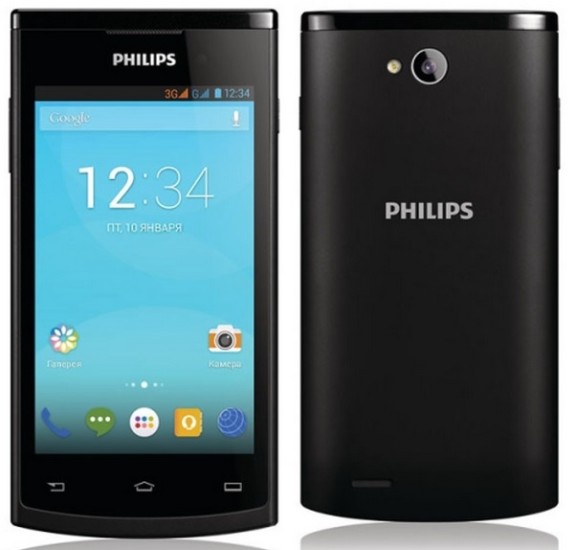 Talking about the Philips S308, it is the most affordable Android smartphone among three, feature a 4-inch display along with 800*480pixel resolutions, 1.2GHz dual core processor from MediaTek, 512MB RAM, android 4.2 Jelly Bean operating system and a 5MP camera at back, with all these specs, it is priced around INR 8,290. Keeping in mind all these specs and price, the device does not stand anywhere in the market, in fact, it completely far behind from the devices like Moto E, Micromax Unite 2 and Lava Iris X1. Check out Lava Iris X1 VS Micromax Unite 2 VS Moto E here.

The second most affordable smartphone that Philips launched today is Philips W3500 priced INR 16,195. A 5-inch display device with the same resolution as the Philips S308 and running on 1.3GHz quad core processor from MediaTek and 1GB RAM on board. As I mentioned earlier, the smartphone is running on slightly older version of Android 4.2 Jelly Bean and no word on upgrade of this device right now.

There is a 5-megapixel rear camera along with LED flash and a 2-megapixel front camera as well for selfie. There is 4GB of internal storage along with up to 32GB memory card support.

On the connectivity front, there is 3G, Wi-Fi, Bluetooth and GPS. On the other hand it is a dual SIM smartphone. There is 2200mAh battery on board as well. The smartphone is priced INR 16,195 in Indian market.

The most premium device in all three devices launched is Philips W6610. It is a 5-inch IPS display smartphone along with 960*540pixel resolution display. The smartphone runs on 1.3 GHz quad core processor from MediaTek coupled with 1GB RAM on board. The smartphone is running on Android 4.2 Jelly Bean operating system.

There is an 8-megapixel rear camera at back with LED flash and a 2MP camera at front as well. The smartphone has 4GB of internal storage along with up to 32GB memory card support.

And the hero feature of this device, its battery, it has 5300mAh huge battery, which company claim can provide up to 33 hours of talk time.