LG just announced a new device under G series; the new LG G3 is the successor of the last year popular LG device G2. The pricing of the smartphone is not known yet, but it does come in five different colours Metallic Black, Silk White, Shine Gold, Moon Violet and Burgundy Red colours. The new unique feature in this smartphone that LG is touting from few days is Laser auto focus mode in smartphone. The new technology with Laser auto focus takes pretty good images and LG is really excited about it. The back cover of G3 is made of plastic, but this time the battery of G3 is removable unlike the G2 which battery was not removable. The G3 comes with high-power 1W Hi-Fi sound that we have already seen on LG G2. The LG is also touting some smart features of LG G3 like smart keyboard, smart notice smart security. The G3 is rolling out from 28May globally. 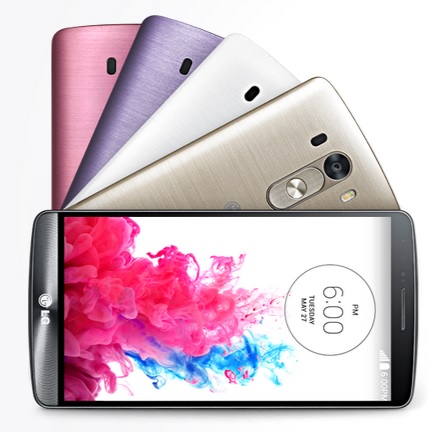 Talking about the specifications of LG G3, it is a 5.5-inch Quad HD display has 538 pixels per inch density along with 2560*1440pixel resolution. It’s a bezel-free edge-to-edge 5.5 screen. On the other front the G3 comes with 2.5GHz quad-core Snapdragon 801 processor along with an Adreno 330 GPU as well for better graphics. The smartphone is running on latest operating system Android 4.4.2 Kitkat along with LG’s simple flat GUI on the top.

Talking about the storage of LG G3, it comes in 2GB and 3GB RAM variant and supports 16GB and 32GB internal storage respectively. On the other front it supports up to 128GB memory card as well.

The LG G3 is packed with 3000mAh removable battery. The smartphone also comes with a Wireless charging dock. On the connectivity front, it comes with 2G, 3G, 4G, Wi-Fi, Bluetooth 4.0, GPS and NFC as well.

The smart Notice feature is a predictive recommendations based on the location, status and behaviour of your phone. Smart Notice suggests you what you need like “would you like to erase the 9 apps that you have not used for two months?” Quick circle shows you six most used apps on top.