As we have told you earlier about the red Nexus 5 leaked in photos. Finally, the Red colour Google Nexus 5 is available in Indian Play Store for purchase. In addition, it is also available in other countries Play Store like U.K, USA, Canada, France, Germany, Australia, Japan, Korea and HongKong. The Red Nexus 5 was leaked online in last week of January by tipster. But now it’s been official everywhere around the world. Now we have three colour options for Google Nexus 5 as now it comes in Black, White and Red with two memory variants of 32GB and 16GB. The red Nexus 5 in 16GB priced around INR 28,990 and for 32GB you have to pay INR 32,999 via Indian play store. And as Google play store mentioned it will be delivered to the customer in 1-2 business day only. 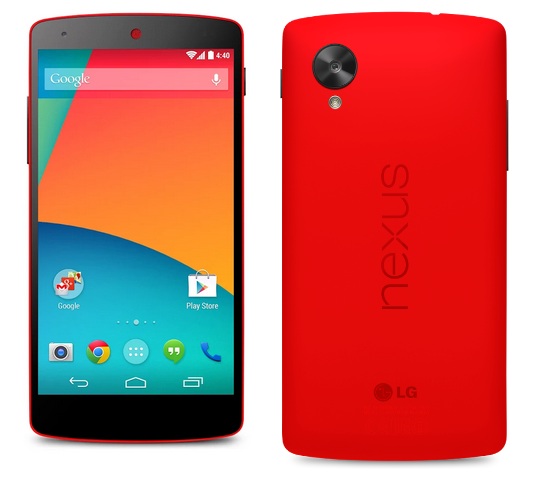 With the new Red Nexus 5, you got a brand new coloured Nexus device nothing more. It has same design and same size as Nexus 5 devices have. The power button placed at top right side of device where as Volume rocker is at left side. The device is only 4.59 Oz in weight and 8.59mm thin.

Talking about accessories, it also comes with Bumper cases that come in Grey, Bright Yellow, Black, Bright Red and Bright grey options. In addition, you can add Nexus Wireless charger in your list too.

Talking about specifications it comes with full HD IPS display with 445 pixel per inch density. LG used Corning Gorilla Glass 3 this time with nexus. It is powered by2.3GHz Qualcomm Snapdragon 800 processor along with Adreno 330 GPU for better graphics performance. With 2 GB on board it will be truly amazing performer and running smoothest Android yet Kit Kat 4.4. The phone comes in two variants of 16 and 32 GB. There is 8 MP shooter at back with image stabilization. And  there is also a 1.3MP shooter for video calling. There is 2300mAh battery installed on it.