Samsung is working on yet another A-series smartphone. The Galaxy A10s has reportedly been listed for certification in the US. It will come with dual rear cameras, a 400mAh battery, and a 3.5mm audio jack. Read more to find about Samsung Galaxy A10s Price in India, Specifications, and Features 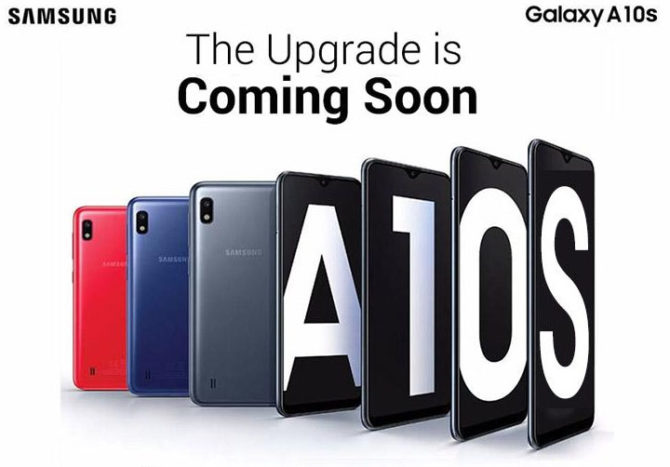 The Samsung Galaxy A10s will be an upgraded variant of the Galaxy A10. A Promotional poster for the device has surfaced online with the tagline “The Upgrade is Coming Soon”.

The upcoming handset is expected to come with a price tag of Rs 8,990. While there is no confirmation about the launch date, it is likely to arrive soon.

According to recent listings and leaks, the Samsung Galaxy A10s is said to be powered by a 2.0GHz MediaTek Helio P22 octa-core processor along with 2GB RAM and 32GB internal storage. It is likely to run Android 9 Pie operating system with One UI on top.

The upcoming handset will be backed by a 4,000mAh battery. It will feature a dual-camera setup (13-megapixel + 2-megapixel sensors) on the back. For selfies and video calling, the smartphone will sport an 8-megapixel front camera (placed in the waterdrop notch).

The Galaxy A10s will sport a 6.2-inch Infinity-V display with HD+ resolution. It will come in Red, Blue, and Gray color options.

Connectivity options will include 4G LTE, Wi-Fi a/b/g/n (2.4GHz), Wi-Fi Direct support, Bluetooth. and a 3.5mm headphone jack. A  fingerprint sensor will be placed on the rear panel.

The Samsung Galaxy A10 is backed by a 3,400mAh battery. It is powered by an octa-core Exynos 7884 processor along with 2GB RAM and 32GB internal storage (expanded up to 512GB).

In terms of optics, the budget handset sports a 13-megapixel rear camera (with f/1.9 aperture) and a 5-megapixel front camera (f/2.0 aperture). Pre-loaded shooting modes include Ultra-Wide, Slow-Mo, and Hyperlapse.

What do you think of the price and features of Samsung Galaxy A10s? Share your views with us in the comments section below.