After Galaxy A7 2017, another upcoming Samsung Galaxy smartphone has surfaced online. Dubbed the Samsung Galaxy A3 2017, the phone has been spotted on benchmarking website GFXbench. The listing gives us fair idea about the key specifications and features of the phone. 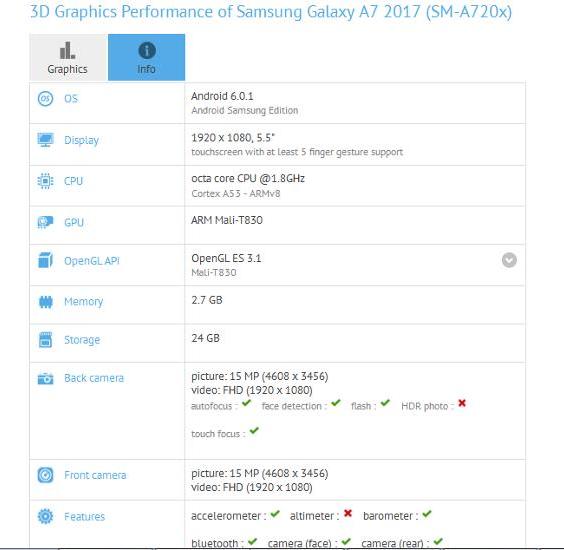 As per the GFXBench listing, the Galaxy A3 2017 is powered by a 1.5GHz octa-core processor paired with Mali-T830 GPU and 2GB of RAM. The phone features a 4.7-inch HD display with 1280×720 pixels resolution. On software front, the phone runs Android 6.0.1 Marshmallow operating system. Also onboard is 8GB of internal memory. For photography buffs, the smartphone sports a 13 mega pixel auto focus primary camera with LED flash and an 8 mega pixel front facing camera. The listing does not reveal the battery capacity of Samsung’s upcoming phone.

To recall, the predecessor- Samsung Galaxy A3 2016 was launched in India in December 2016. It comes with a 1.5GHz quad-core processor coupled with 1.5GB of RAM. The device houses 4.7-inch HD Super AMOLED display and 16GB of internal memory which can be expanded up to 128GB using microSD card. Other specifications include 13 mega pixel rear camera, 5 mega pixel front camera and a 2300mAh battery.

There is no word yet on pricing and availability of the Samsung Galaxy A3 2017. More details are likely to surface in the coming days. Stay tuned with us for more developments on this story!