Earlier this year, Samsung launched the first set of Galaxy A Series smartphones in India. The Galaxy A30 features a 6.4-inch Infinity-U Super AMOLED displays and comes in three color options (Black, Blue, and Red). Now, the company has added a new White color model. Read more to find about Samsung Galaxy A30 White Color Variant Price in India, Specifications, and Features 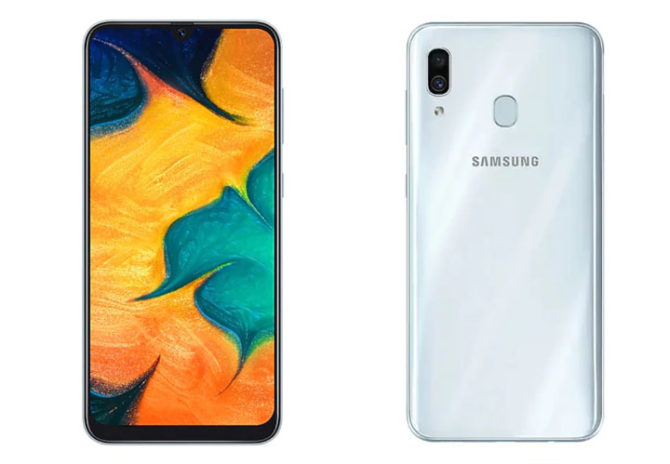 The Samsung Galaxy A30 was launched in India at Rs 16,990. It is now available with a price tag of Rs 15,490. The White color option can be purchased via Samsung’s online store in the country.

The new smartphone is powered by an octa-core Exynos 9610 processor and 4GB RAM. The 64GB internal storage can be further expanded via a microSD card slot (up to 512GB).

In terms of optics, the Samsung Galaxy A30 sports a dual-camera setup on the back. It uses a 16-megapixel primary sensor (f/1.7 aperture) and a 5-megapixel secondary sensor (f/2.2 aperture).

The Samsung Galaxy A30 runs Android 9 Pie operating system with One UI on top. It comes with Bixby Home and Bixby Reminder features.

The dual-SIM smartphone features a 6.4-inch Super AMOLED Infinity-U Display with full-HD+ (1080 x 2340 pixels) resolution. A fingerprint sensor is placed at the back. Additional highlights include Face Unlock feature and a USB Type-C port.

The new handset sports a 5.83-inch Infinity-V display. It is backed by a 3,000mAh battery. For photos and videos, the Galaxy A10e sports an 8-megapixel rear camera. It comes with 32GB internal storage.

What do you think of the price and features of Samsung Galaxy A30 smartphone? Share your views with us in the comments section below.