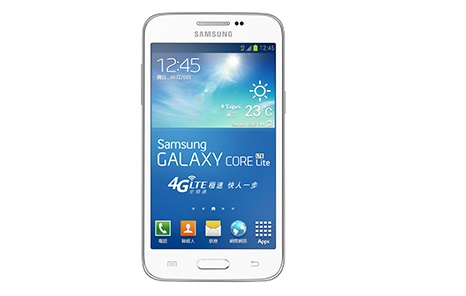 The latest addition in Galaxy Core lineup, the Samsung Galaxy Core Lite offers a 4.7-inch LCD capacitive touch display along with a pixel resolution of 800*480pixel resolutions. The smartphone is powered by a 1.2GHz quad core Snapdragon 400 processor along with 1GB RAM on board. The smartphone runs on Android 4.3 Jelly Bean operating system, it is interesting to see that a top smartphone manufacturer is still shipping its latest devices with not-latest, but-not-too-old operating system Android 4.3 Jelly Bean, while on the other hand Manufacturers like Micromax and Lava launching budget smartphones with latest operating system Android 4.4 KitKat.

On the photography front, the Samsung Galaxy Core Lite comes with a 5-megapixel autofocus rear camera along with LED flash. There is not any front facing camera unfortunately. The smartphone has 8GB of RAM on board along with up to 64GB memory card support on board.

On the connectivity front, the smartphone support 3G, 4G LTE, Wi-Fi, Bluetooth and GPS with GLONASS as well. There is NFC support as well. The smartphone has 2000mAh battery packed inside.The Samsung Galaxy Core Lite comes with some of Samsung’s unique features like Smart Alert reminder, S Travel, S Translator and others.