Samsung has unveiled a new Android Go smartphone in the Indian market. The new Galaxy handset comes with a 6.0-inch HD+ TFT display and 3,300mAh battery. It runs a customized version of Android 8.1 Oreo OS. Additional highlights include a front flash. Read more to find about Samsung Galaxy J4 Core Price in India, Specifications, and Features 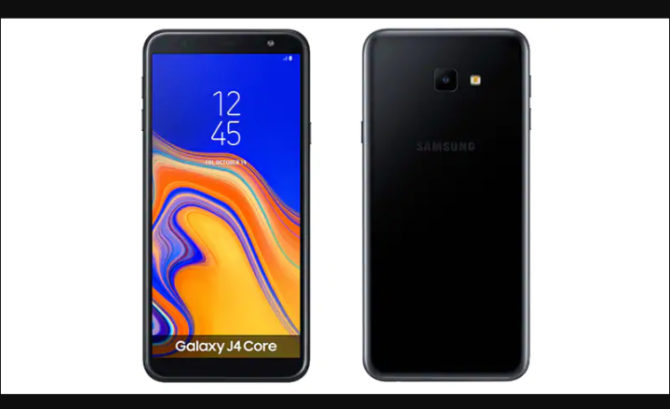 The Samsung Galaxy J4 Core has been listed on the Samsung Mobile Press website. The listing reveals most of the key specifications and features. However, the price and availability of the handset are yet to be revealed. The Samsung Galaxy J2 Core was launched in India at Rs 6,190.

The new handset features a 6.0-inch TFT LCD display with HD+ (720 x 1480 pixels) resolution. It is powered by a 1.4GHz quad-core processor and 1GB RAM. The 16GB internal storage can be further expanded via a microSD card (up to 512GB).

In terms of optics, the Samsung Galaxy J4 Core sports an 8-megapixel rear camera with a f/2.2 aperture. The 5-megapixel front camera also comes with f/2.2 aperture. Both cameras are accompanied by an LED flash.

In the power department, the new smartphone is backed by a 3,300mAh battery.

The Samsung Galaxy J2 Core was launched in August this year. It was the first Galaxy model to be a part of Google’s Android Go programme and came with preloaded features like Optimised Data Control and Ultra Data Saving.

The budget smartphone sports a 5.0-inch display with a resolution of 540 x 960 pixels. It is powered by a 1.4GHz quad-core processor along with 1GB RAM and 8GB internal storage. The Samsung Galaxy J2 Core also sports an 8-megapixel (f/2.2) rear camera and a 5-megapixel front camera. It is backed by a 2600mAh battery.

What do you think of the new Android Go smartphone? Will you purchase the new Samsung Galaxy J4 Core? Share your views with us in the comments section below.