Samsung is reportedly working on a new smartphone in the Galaxy O series, dubbed the Samsung Galaxy O7. The device has been spotted on GFXBench revealing specifications.

According to the benchmark listing, it will be powered by a 1.2GHz quad-core Qualcomm Snapdragon 410 processor paired with 1GB of RAM. As for display, the listing shows two displays- a 5.8-inch HD display and a 5-inch HD display, both with 1280×720 pixels resolution. On camera front, it sports a 13 mega pixel rear camera and a 5 mega pixel front facing camera. Other specifications of the device include 8GB of internal memory and Android 5.1.1 Lollipop operating system.

There is no word on battery capacity of the device. Connectivity options of the device include Wi-Fi, Bluetooth and NFC. As per the spec-sheet, the Galaxy O7 will be a mid-ranged smartphone. It will come loaded with accelerometer, barometer, compass, gyroscope and light sensors. 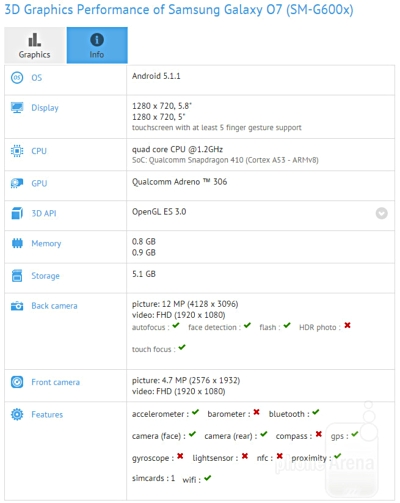 There is no word on pricing of the Samsung Galaxy O7 or when the company plans to launch the device. More details are likely to surface in the coming days. stay tuned with us for more developments on this story!