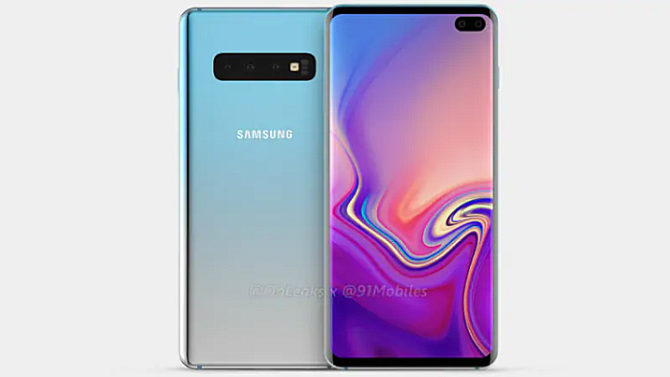 The Samsung Galaxy S10+ is expected to be launched at MWC 2019 in late February next year (to be held in Barcelona). While the upcoming handset has been spotted in several leaks online, there is no confirmation about the Indian price or launch date as yet.

According to recent leaks and rumors, the Samsung Galaxy S10+ will sport a dual camera setup on the front. Both cameras will be placed in a wide display hole (compared to Galaxy S10 and other upcoming devices). At the back, the handset will feature a triple camera setup (standard lens + telephoto lens + wide angle lens) with an LED flash and a heart rate sensor.

The Samsung Galaxy S10+ is tipped to sport a 6.4-inch AMOLED dual-curved edge display with QHD resolution. It will be powered by Qualcomm Snapdragon 8150 processor (in the US and China) and the Exynos 9820 SoC (in India and other markets).

The upcoming handset will run Android Pie operating system with One UI on top. The company might also add ‘reverse wireless charging’ feature that will allow users to charge their wireless charging-enabled devices by placing them together. Additional features will include an ultrasonic in-display fingerprint sensor, Face Unlock, 3.5mm headphone jack, a USB Type-C port, and a dedicated Bixby button.

Samsung is tipped to launch multiple models and variants in the S10 series. This might include – the Galaxy S10 Lite, Galaxy S10, and Galaxy S10+. All devices are likely to sport Super AMOLED display. The company unveiled the Infinity-O design at the Samsung Developer Conference (SDC 2018) last month.

Additionally, a 6.7-inch Galaxy S10 model is expected to come with top-end features like 5G connectivity and a total of six cameras (4 rear cameras + 2 front cameras).