As the launch date of the Galaxy SIV is closing in, Samsung is having a hard time keeping its details under the wraps. An AnTutu benchmarking test has just revealed what the Samsung flagship could pack in, and the spec sheet looks pretty interesting. The first and foremost most interesting detail you’d like to know is that it will indeed come with an Exynos Octa-Core processor, instead of the previously rumoured Qualcomm quad-core unit clocked at 1.9 GHz.

The screen size of the device is something which every leak has disclosed, and that is 4.99 inches of Full HD display. Inside the smartphone, will be a 1.8GHz octa-core Exynos 5 processor which would offer some mindblowing performance to be precise. Helping it would a PowerVR SGX 544MP GPU. To let you use the processor without any troubles whatsoever, you get a 2GB RAM and the smartphone will offered in memory storage options of 16 GB and 32 GB. 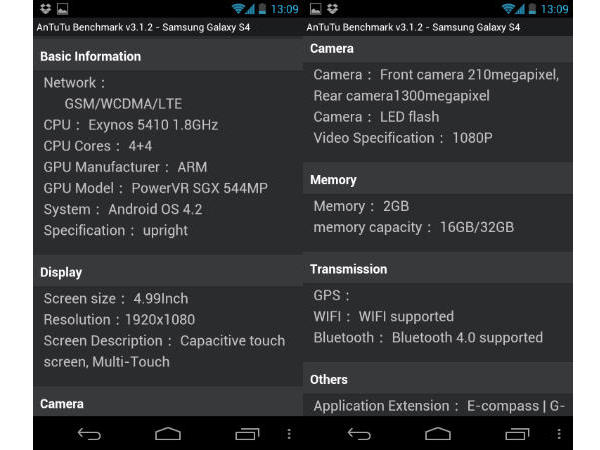 The rear of the smartphone will get a 13 MP snapper coupled with LED flash and the front camera unit’s resolution would be 2.1 MP. Connectivity bases would be all covered with the flagship getting LTE, Wi-Fi, Bluetooth 4.0 and a NFC chip. It would run on the latest version of Android, 4.2 Jelly Bean right out of the box and the software will only help you realise the full potential of this very capable smartphone.

We want you to take these specs with a pinch of salt as the rumour mill surely churns out a lot of things that are mere speculations. Reports also suggest that the processor will be a Snapdragon 600 but the latest leak does not suggest that. Samsung is planning to launch the smartphone on 14th March which is not for from now and we can surely put all speculations to rest then with the official spec-sheet being with us after the launch.