Spice Mobiles has launched  Spice Dream Uno H Android One Smartphone in India. This smartphone is the Hindi variant of the existing Android One smartphone which was launched earlier this year by Google. This new launch from Spice offers Hindi user-interface to the users and is priced at Rs. 6,499/-. It is equipped with a Hindi input keyboard, Hindi voice input and Hindi versions of various applications like Sony live, Aajtak, Hungama, Google translate and Spice cloud. With this smartphone, company seeks to reach 300 million Hindi speaking population living in states like Uttar Pradesh, Haryana, Rajasthan, Madhya Pradesh, and Bihar in India. 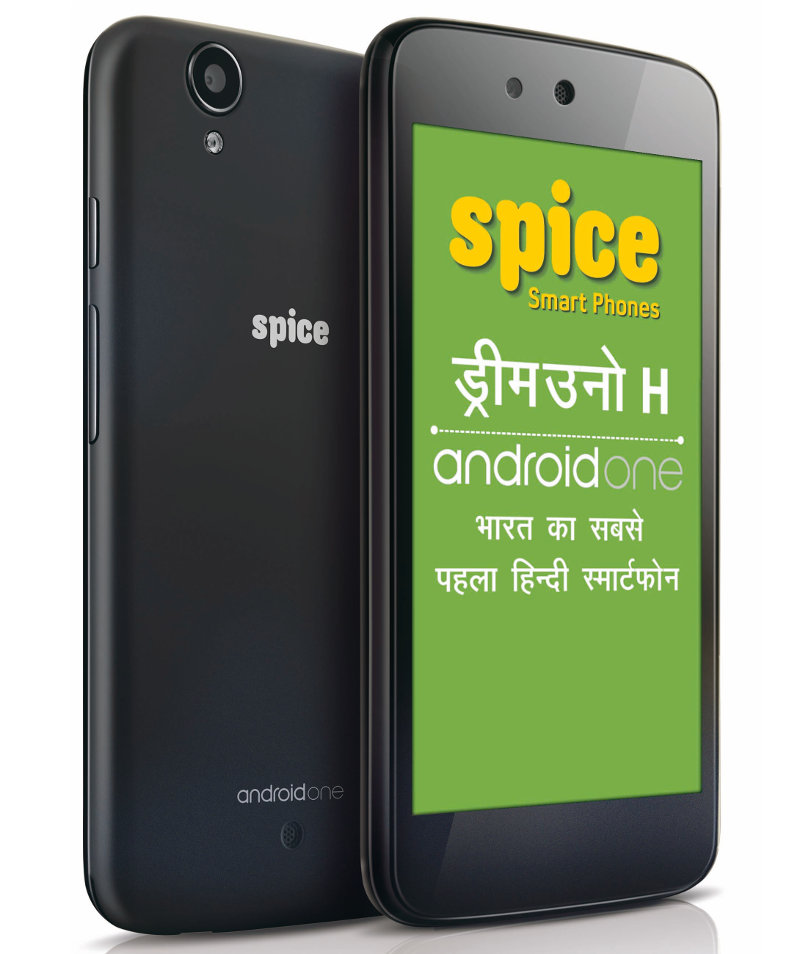 “Keeping in line with our shared philosophy of bringing the best in technology at an affordable price, we are delighted to partner with Google to launch India’s first truly Hindi phone – the Spice Dream Uno H. We firmly believe that this revolutionary phone will contribute immensely in connecting the 300 million Hindi speaking masses to the internet with its useful applications such as Google Search, YouTube and Google Maps,” said Prashant Bindal, Chief Executive Officer, Spice Mobility Ltd.

Spice Dream Uno H Android One smartphone is powered with a 1.3 GHz Quad-Core processor coupled with 1 GB of RAM and runs on 4.4.4 Kitkat operating system which is upgradeable to Android Lollipop. It comes with a 11.43 cm IPS display, 5 mega pixel rear camera with auto focus and a 2 mega pixel front facing camera. For storage purpose it houses a 4 GB internal storage which is expandable up to 32 GB for storing document files, media files, images etc.

“Google has been pleased to work with Spice over the last few months on Android One — a program designed to help bring high-quality, affordable Android devices to everyone. We are excited by the launch of the second Spice Android One smartphone, this time targeting Hindi users. This is another step in empowering the next billion people,” said, Caesar Sengupta, VP, Product, Google.

This smartphone will be available at all major retail stores across India at an affordable price tag of Rs. 6,499/-.