Vodafone has launched a new 4G WiFi device. The new Vodafone R217 4G MiFi device comes with 7-hour battery life and micro SD card support. It is priced at Rs 1,950 and will be rolled out in all the circles with Vodafone’s 4G coverage. With this entry, Vodafone will compete against the Reliance Jio device. The new 4G WiFi device comes with many interesting features. Let’s how it compares to its rival. Read more to find about Vodafone 4G MiFi Vs Reliance Jio JioFi – Which Portable WiFi Device Is Better? 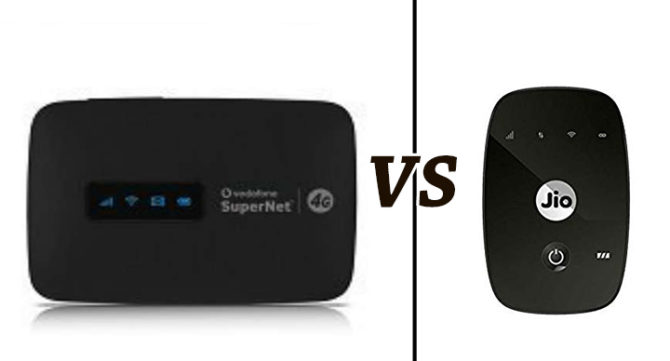 While the Vodafone R217 4G MiFi Device is listed at an original price of Rs 3,690, it is currently available at a discounted price of Rs 1,950. The Reliance Jio JioFi was introduced in 2016. It is now available at Rs 999.

The Reliance Jio JioFi measures 74 x 74 x 20mm and weighs 95g. It comes with a much larger 3000mAh battery. The microSD card slot supports up to 64GB storage.

Over the past year, Vodafone has been competing with the likes of Reliance Jio, Airtel, and BSNL via prepaid/ postpaid plans. The new WiFi device is the latest step by the telecom giant to counter its rivals, specifically Reliance Jio. While it falls short of the Reliance Jio JioFi, we will have to wait and see how the new device is received by the customers. What do you think of the new Vodafone 4G MiFi? Will you go for it? Let us know in the comments section below.

Also read: New Xbox Being Made With Discussions With Game Developers