WhatsApp has been constantly adding new features throughout this year. The messaging platform is working on several significant upgrades to enhance user experience. Lets’satke a look at some of the upcoming features. Read more to find about New WhatsApp Updates – What To Expect 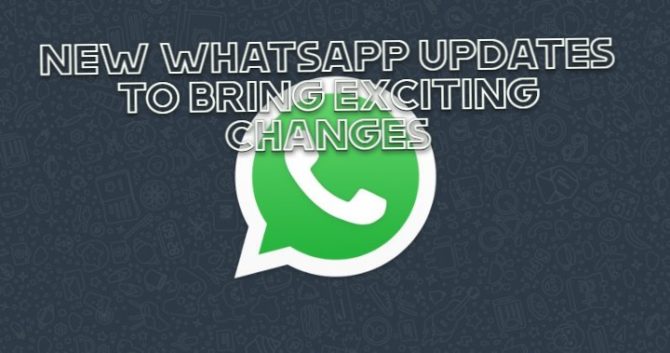 The Facebook-owned messaging platform has over 200 million monthly active users in India and 1.2 billion users worldwide. Recently, it rolled out ‘Forward Message Limit’ for Indian users to limit fake news and misuse of its platform. Message forwarding is now limited to five chats in India.

The company also added a new Mute button that allows users to mute chat directly from the notifications panel. It also announced the addition of ‘Picture-in-Picture’ Mode to Android app that will allow users to watch YouTube videos while checking the messages.

The WhatsApp group video/ voice calling features now allow you to chat with up to four people at the same time. Additionally, the ‘Swipe to Reply’ gesture support lets you respond to a WhatsApp message by simply swiping it to the right side.

WhatsApp has also added support for the Apple iPhone XS Max along with exclusive features for iPhone and iPad users. Let’s see what to expect in the coming weeks:

New WhatsApp Updates – What To Expect

Security: The biometrics will be added to the WhatsApp Authentification feature in the new update. It will allow users to protect their messages with their fingerprint. The Facebook-owned app is expected to come with a major update for Android soon.

The new security option will work with both iOS and Android (Marshmallow and newer) smartphones that feature a fingerprint sensor. Users can easily enable the new feature, once they receive the new update.

Dark Mode: The much-awaited feature is already in the works. The new option will significantly improve the appearance on the messaging platform soon. Additionally, it will help users to save the battery (especially on devices with AMOLED displays).

QR scanning features: According to recent reports, the messaging platform is working on a new feature called ‘Add Contact’. It will allow users to quickly add contacts directly in the app. The new feature will be available on both iOS and Android devices.

A simple UI will allow users to choose the country where the contact is located. WhatsApp automatically inserts the country code and allows you to insert the phone number. Users can also revoke the QR code to stop future users to scan the code to get contact information.

Sharing: Users will soon be able to share their status posts to Facebook, Instagram, Gmail and Google photos. You will not have to link different accounts to use this feature. The transfer of the status will be made via the data-sharing API used by iOS and Android.

Additionally, the messaging platform may bring a new Silent mode and ‘Vacation’ mode to the application. It is said to archive the chat for as long as the users want. Currently, WhatsApp unarchives a chat as soon as the new chat arrives.

The messaging platform will also automatically rank contacts by detecting which contacts you interact with more. This will help the app to keep your favourite contacts up on top all the time.

What do you think of the upcoming WhatsApp updates? Share your thoughts with us in the comments section below.