Within less than a month of rolling out WhatsApp voice calling feature for Android users, Facebook owned WhatsApp has started the roll-out of the said feature for iOS users. To recall, the roll-out for Android users began in February 2015 and iPhone users remained disappointed all that while. Now, iOS users will not have to wait much for the said feature since WhatsApp has released a major update (version 2.12.1)  for its iOS app. However similar to the roll-out process followed for Android customers, iOS users will also not get the voice calling feature on all devices at once since App Store’s listing states that it “is rolling out slowly over the next several weeks.”

“Call your friends and family using WhatsApp for free, even if they’re in another country. WhatsApp calls use your phone’s Internet connection rather than your cellular plan’s voice minutes. Data charges may apply,” says WhatsApp in App Store listings.

Coming to the new features, the iOS 8 share extension feature allows the users to share photos, videos, and links to WhatsApp from other apps directly. With the quick camera button in chats, users can take photos and videos as well as choose recently taken image or video to share. Users can also edit your contacts from WhatsApp. Another new feature enables users to send multiple videos at once with editing options to crop and rotate the videos before sending them. It is unclear as of now if WhatsApp will follow invite system in initial stages of roll-out like the one followed in Android where one user will have to wait until someone else with that feature on his device calls. 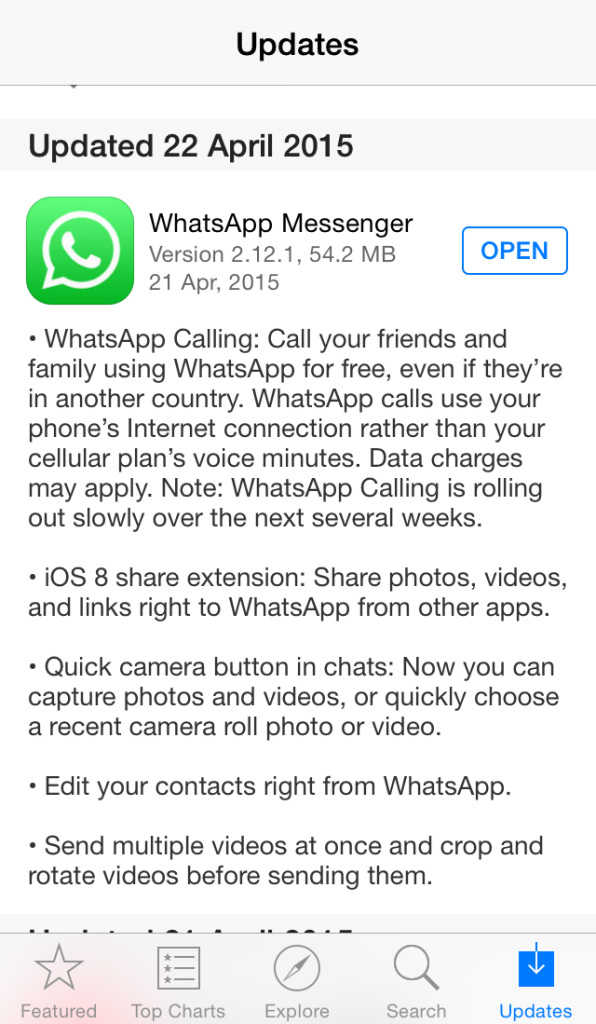 Have you been lucky enough to have tried your hands on voice-calling feature on your iOS device? We would like to hear from you on the same. Let us know your views in the comments below!