Chinese handset maker Xiaomi is planning to expand its smartphone portfolio with the upcoming smartphone codenamed Xiaomi Ferrari which has been spotted on benchmarking listings of GFXBench and GeekBench. The handset, as the name suggests looks powerful on the specs sheet. It is expected to be launched in coming months in mid-range price category. Read on to find more information on specifications, features, price and availability of upcoming Xiaomi’s Ferrari phone. 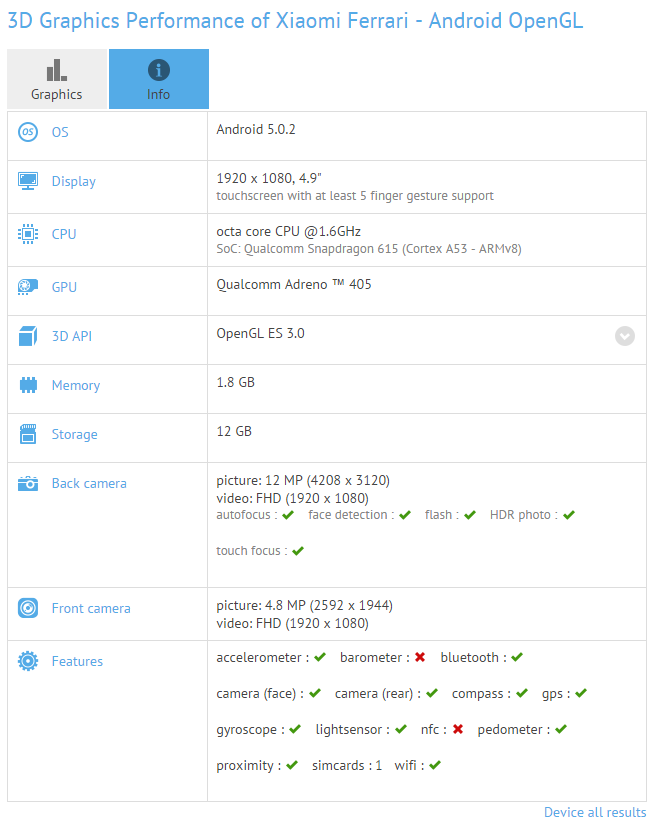 As far as specifications of Ferrari smartphone are concerned, it will be powered by an octa-core Qualcomm Snapdragon 615 processor clocked at 1.6 GHz coupled with 2 GB of RAM and Adreno 405 GPU. It features a 4.9 inch full HD touchscreen display with 1920 x 1080 pixel resolution and runs Android 5.0.2 Lollipop operating system wrapped under MIUI.

It sports a 12 mega pixel auto focus camera on the rear with features like Flash, Face detection, HDR Photo and Touch Focus. There is also a 4.8 mega pixel front facing camera on. The Ferrari phone will house 16 GB of inbuilt storage.

Rest of the specifications about battery capacity and microSD card are unclear at this time and are expected to be revealed in the coming days.

Features and Specifications of Xiaomi Ferrari

While the specifications of the device have already been leaked, we expect Xiaomi to make an official announcement for the same in the coming days.

As reported earlier, Xiaomi is also working on its another smartphone Xiaomi E4 which share identical specs as that of Mi 4 except that it features 2 GB of RAM instead of 3 GB RAM in Mi 4. Other specifications of the handset include 2.5 GHz quad-core Snapdragon 801 processor, 5-inch full HD display (1080 x 1920 pixels resolution, 441 ppi pixel density), Android 4.4.3 KitKat OS with Xiaomi’s MIUI 6.0 and 3080 mAh battery.

We will keep you updated with the developments on this story. Stay tuned with us!