Earlier this month, Xiaomi announced that it will host global premier of its new smartphone on April 23, 2015 in New Delhi, India. Now, for all Xiaomi fans who want to see the event live, the company has revealed live stream details of its ‘i IS COMING’ event where it is going to globally launch its Mi phone. Users can either visit company’s official website Mi.com or directly visit the live streaming page today where they will see a countdown timer to the launch event along with live Twitter feed in which users can participate with  ‘#MiLaunch2015’ hashtag. 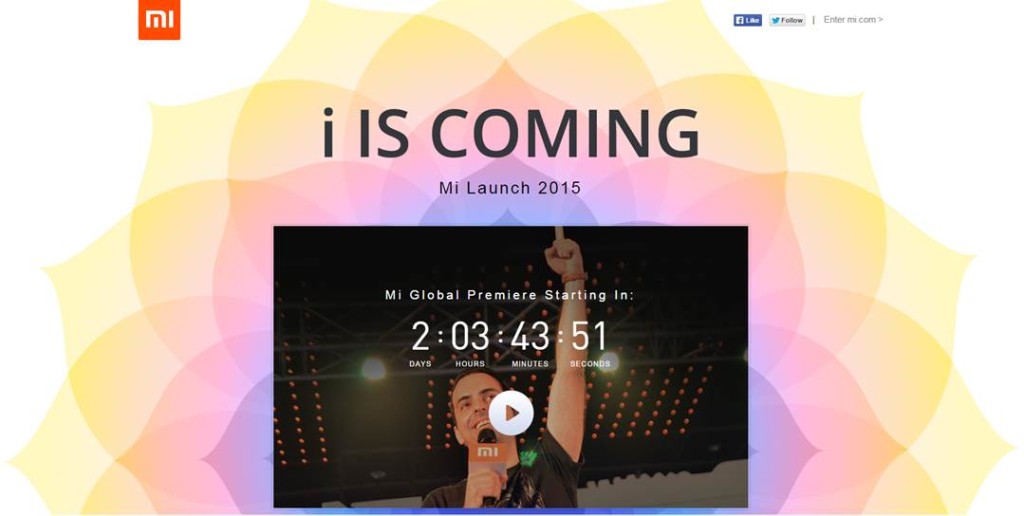 Chinese handset maker Xiaomi has announced an event in India where it will hold global Mi phone premier. The event is scheduled on April 23, 2015 in New Delhi, India at which the company is likely to launch its Mi phone globally. Xiaomi has tweeted about the event on its official page. The tweet reads- ‘i IS COMING. Register for our global Mi phone premiere in New Delhi on 23 April.’ Through the tweet, Xiaomi has also asked its fans to register for the event. Furthermore, Xiaomi CEO and founder, Lei Jun; president and co-founder Bin Lin and VP Global, Hugo Barra will also be attending the event.

The company has not revealed about the upcoming Mi smartphone, however global premier indicate that a new handset will be launched altogether. The upcoming handset could be the Mi5 or Xiaomi Ferrari phone whose leaked specifications have been making rounds over internet lately. The Xiaomi Ferrari is speculated to pack a 1.6 GHz octa-core Qualcomm Snapdragon 615 processor paired with Adreno 405 GPU and 2 GB of RAM. It is likely to feature a 4.9 inch full HD touchscreen display with 1920 x 1080 pixel resolution and run Android 5.0.2 Lollipop operating system. The handset is rumored to come with 16 GB of inbuilt memory, 13 mega pixel rear camera, 5 mega pixel front facing camera. Rest of the details are scarce at this moment.

Xiaomi also took wraps off its Redmi 2A and Mi Note (Pink Edition) phones last month in March. The former is more affordable version of Redmi 2 while the latter, as the name suggests, is the pink colored variant of Mi Note phone.

Which handset do you think will Xiaomi launch on its April 23 event in New Delhi? Let us know in the comments below. Stay tuned with us for more updates!